Kohli’s return does bring with it a dilemma for head coach Daniel Vettori. 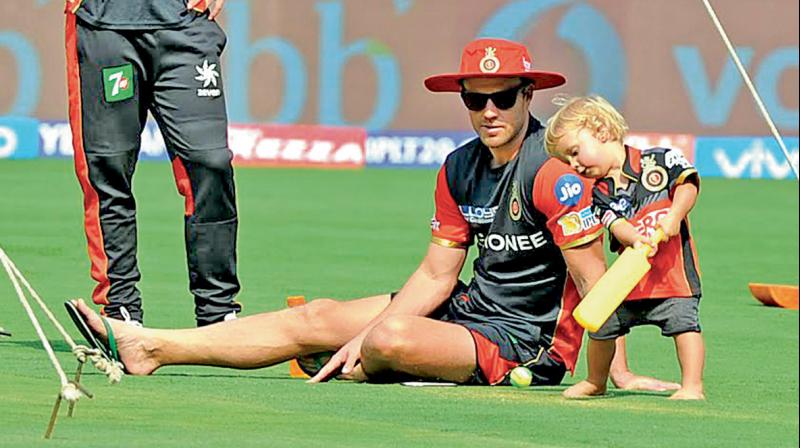 AB de Villiers unwinds during a practice session with his son at the M. Chinnaswamy Stadium in Bengaluru. (Photo: Aasian Age)

Bengaluru: He is back! Following time on the sidelines for a shoulder injury, Royal Challengers Bangalore will welcome the talismanic Virat Kohli back to the fold when they face Mumbai Indians at the M. Chinnaswamy Stadium here on Friday.

The maverick batsman will be a welcome addition to the home side who have made a rocky start to the season. With just one win in three matches, RCB will be keen it level the win-loss ratio and start the climb up the table earlier than is their wont.

Beset by injuries since the start of the season, last season’s finalists will be a formidable force with the captain and star batsman AB de Villiers, who smashed a 46-ball-89 on his return from injury, back in action.

Kohli’s return does bring with it a dilemma for head coach Daniel Vettori. With Kohli taking one of the home-grown spots in the team, it will be interesting to see whether they persist with Vishnu Vinod, who made seven from 12 balls against Kings XI Punjab, as the specialist keeper or go with Kedar Jadhav, who can keep, for his batting prowess.

The international spot will also be one to watch out for. South African de Villiers, who had a light training session and was seen playing with his son, and English pacer Tymal Mills are non-negotiable inclusions but the other spots are very much up in the air.

Stand-in-captain Shane Watson has so far been lacklustre and add to that Chris Gayle’s largely indifferent form, it might just pave the way for the return of leg-spinner Samuel Badree who has been somewhat of a forgotten man in the team.

Mumbai come into the match after a strong win over Sunrisers Hyderabad. Wily veteran Harbhajan Singh and young seamer Jasprit Bumrah have been calling the shots with the ball with strong support from their openers and an increasingly dangerous looking Nitish Rana.

The strike power of the Pandya brothers too might come in handy for the visitors even as Rohit Sharma, so far a bitter disappointment, will be hoping to channel some of the mojo that he possessed at the venue during his 209-run innings against Australia in 2013. At a ground that has consistently produced big scores over the years, this one has all the makings of another run fest.