Kohli (67) in company of de Villiers (59 not out) scripted a superb runchase, sharing a 85-run stand to lay the foundation. 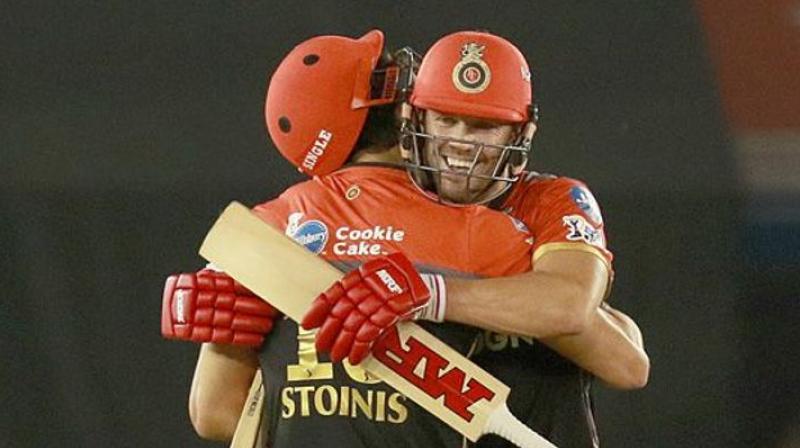 After Kohli got out, Stoinis said he had a chat with de Villiers on how to go about the target. (Photo: BCCI)

The all-rounder had walked in at the fall of skipper Virat Kohli with RCB needing 46 runs off 27 balls. Kohli (67) in company of de Villiers (59 not out) scripted a superb runchase, sharing a 85-run stand to lay the foundation. "I am pretty familiar with this ground, I have played here for three years," said Stoinis at the post-match press conference here.

"The more comforting factor is batting with AB de Villiers, that makes it easier." He said that RCB badly needed a win to stay alive in the tournament. "We needed it, it's good get to two points and get ourselves started," he said.

After Kohli got out, Stoinis said he had a chat with de Villiers on how to go about the target. "Make sure to keep head straight, watch the ball, keep it simple and then once you get in think about which balls you want to target," Stoinis said, referring to the advice from his senior partner.

Stoinus also praised the knock played by KXIP opener Chris Gayle. "Main thing is every team has got world class players and they have got someone like Chris Gayle, who is arguably the best T20 player," he said.

Praising the effort of RCB bowlers, he said they applied brakes during middle overs claiming wickets at regular intervals, which also ensured that Gayle had to play a controlled innings. "Make sure you keep coming back and get into contest with every single ball and that's what our seam bowlers did, they did particularly well.

They got hit early but all of them had good spells later and then our spinners controlled through the middle overs as there was a little bit of turn," said Stoinis. On the games ahead, he said RCB are not thinking too far ahead.

"We are not thinking about finals and that sort of thing..it is just about each game now, we can't afford to get too far ahead of ourselves, it is good to get started, we will take next game as it comes and hopefully we will win few on trot..it's still a long season," he said.