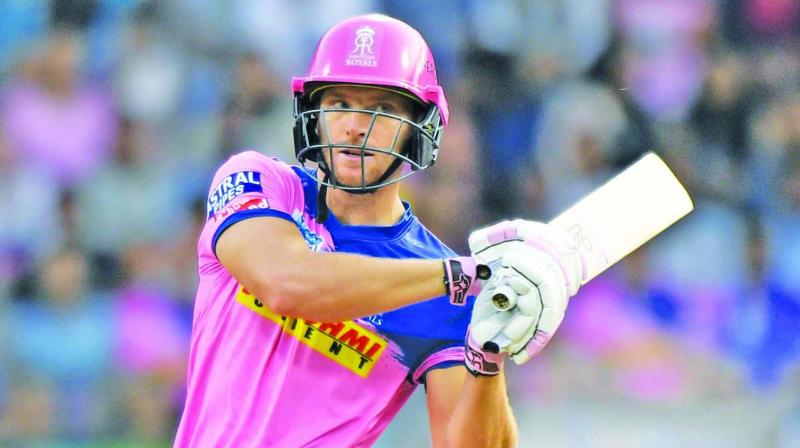 Mumbai: Jos Buttler’s clinical knock of 89 off 43 balls guided Rajasthan Royals to a comprehensive four-wicket win over Mumbai Indians at the Wankhede stadium here on Saturday.

Chasing 188, Buttler belted eight boundaries and seven sixes to bring the equation down to six runs per over but after his exit Royals lost four quick wickets to make things interesting.

However, Shreyas Gopal (13 not out), who had bowled a miserly spell, made full use of a reprieve given by wicketkeeper Ishan Kishan of Jasprit Bumrah (2/23) to take his side home with three balls to spare.

Buttler was involved in a 60-run opening stand with skipper Ajinkya Rahane who showed his class on Wankhede return with a well-made 37 in 21 balls.

The duo went after Jason Behrendroff and Alzarri Joseph to earn a healthy powerplay. Rahane was dismissed by Krunal Pandya (3/34) as slow bowlers kept check for couple of overs. Buttler brought his franchise closer to elusive win with 87-run partnership in 41 balls for the second wicket with talented Sanju Samson (31).

The Englishman broke free with two sixes of Krunal and kept charging down the wicket to hit sixes with ease as MI skipper Rohit Sharma looked out of ideas. He hit Joseph for 28 runs in 13th over before holing out to deep in next over of leg-spinner Rahul Chahar.

Rohit, making a comeback after missing the previous game, made a 32-ball 47 and was involved in a 96-run opening stand with de Kock. The South African took on Krishnappa Gowtham and Archer while Rohit went after Dhawal Kulkarni to collect 57 from powerplay overs.

Liam Livingstone who replaced injured Ben Stokes was greeted with two sixes by de Kock in his first over. He never returned to bowl. Gowtham got the treatment again from Rohit who hit two boundaries of his total six in the over and a lone six. The duo were in complete control much to the delight of over 21000 special kids from different NGOs as MI’s Education and Sports for All initiative.

After Rohit’s exit in the 11th over, de Kock kept finding boundaries from the other end before he was dismissed by Archer in the penultimate over. Suryakumar Yadav played a cameo before he was castled by Dhawal Kulkarni. Kieron Pollard struggled as Archer sent back Rohit, Pollard and De Kock before Hardik Pandya’s 11-ball cameo to get 28 runs propelled Mumbai to 187/5.