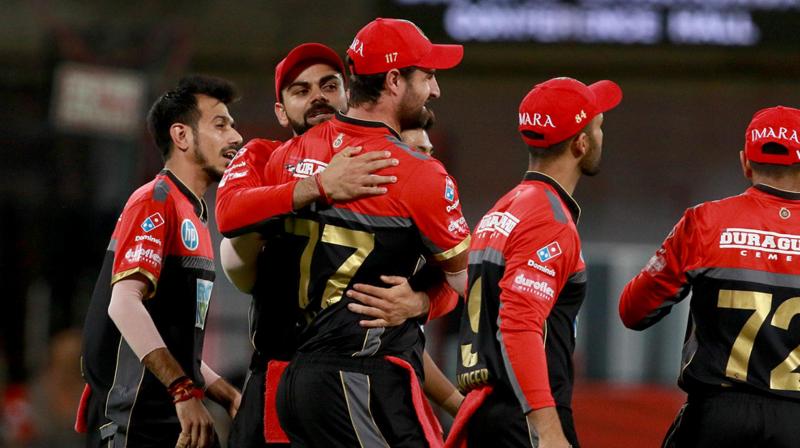 Indore: The match at Holkar stadium in Indore on Monday turned out to be a one sided affair as Royal Challengers Bangalore beat Kings XI Punjab by 10 wickets to stay in hunt for the play-off spot. The victory also gives massive boost to RCB's net run rate.

After a splendid performance by the bowlers during KXIP innings, RCB openers Virat Kohli (48 runs of 28 balls) and Parthiv Patel (40 runs of 22 balls) ensured that the team crossed the finish line without much trouble.

As comprehensive a victory as it can get for the @RCBTweets.#KXIPvRCB pic.twitter.com/dyCLvftjlY

In a match that turned out to be a one-sided contest, KXIP batsmen put up shoddy display of batting to put their play-off chances in danger. KL Rahul and Gayle gave a blazing start to the KXIP innings, but once Umesh Yadav dismissed both the openers in same over, there was no looking back.

Aaron Finch tried to provide some resistance with the bat, but poor shot selection costed Australian his wicket. After Finch’s dismissal, the lower order failed to put up any fight as three batmen ended up being run-out.

In the end it was mere formality for RCB openers as Virat Kohli and Parthiv Patel applied finish touches to the match. The game that was expected to be a thrilling one turned out to be a damp squib.

Victory is just a mere formality for RCB as they are just 35 runs away from the target.

Royal Challengers Bangalore bowlers put up a splendid show with the ball as Kings XI Punjb were bowled out for just 88 runs in the Indian Premier League match played at Holkar Stadium in Indore on Monday.

KL Rahul (21 runs) and Aaron Finch (26 runs) were the major contributors with the bat as other batsman failed to put their hand up. After opening stand of 36 runs between openers KL Rahul and Chris Gayle, RCB bowlers completely dominated the match.

Wickets kept on falling like pack of cards as other batsmen failed to occupy the crease. Umesh Yadav was the pick of the bowlers for RCHB with figures of 3-23 in 4 overs. Siraj, Chahal, de Grandhomme and Moeen Ali also chipped in with wickets. KXIP skipper R Ashwin, Mohit Sharma and Ankit Rajpoot were the unfortunate batsmen to get run-out.

WICKETS! This is just terrible. First Aaron Finch and then R Ashwin and now Andrew Tye, RCB bowlers have run through the batting lineup.

This has been poor batting display from KXIP yet again as batmen failed to occupy the crease for a longer time. Karun Nair, Marcus Stoinis and Mayank Agarwal fell in quick sucession leaving their team a mountain to climb.

WICKET! Yuzvendra Chahal gets his name of wicket list, dismisses Marcus Stoinis. A well flighted delivery that turned into a yorker as Stoinis failed to pick up the length.

WICKET! Another KXIP batsman makes his way to pavillion. Karun Nair gives an easy catch to Virat Kohli at slip. Mohamed Siraj gets his first wicket.

Strongman @y_umesh on 🔥🔥 here in Indore.

The hosts in a spot of apple crumble drama.#KXIPvRCB pic.twitter.com/azIWu0Qqov

WICKETS! RCB have made a strong comeback with two wickets in one over. Umesh Yadav sends back KXIP openers to dug out . First KL Rahul and now Chris Gayle.

Dropped! How costly will this prove. Umesh Yadav angled the ball away from Chris Gayle and the batsman poked at it, got a thick edge. Parthiv dives to his left but the ball hit higher on the palm, forcing the spill

Preview: It’s the battle of two teams, who are eyeing for play-off birth. With Sunrisers Hyderabad and Chennai Super Kings already qualifying for the play-offs, both Kings XI Punjab (KXIP) and Royal Challengers Bangalore (RCB) will battle it out to keep themselves in race for the play-off spot, when they face each other at the Holkar Stadium in Indore on Monday.

The last time these two teams met, it was RCB who emerged victorius by 4 wickets. After bowling out KXIP to 155, the RCB batsmen led by de Kock (45) and de Villiers (57) chased down the target.

Both the teams come into the game with contrasting fortunes. RCB registered a comfortable 5 wicket win against the Delhi Daredevils in their last game . Kohli (70) and de Villiers (72 not out) put together a 118-run partnership to take the match away from DD.

On the other end KXIP lost their match to Kolkata Knight Riders by 31 runs. Thanks to Narine’s 75, Karthik’s 50 and Russell’s 31 KKR posted 245 runs on board, which is also the highest in this years IPL. KXIP failed to chase down the target and were restricted to just 214/8 in 20 overs.

With KXIP currently third on the table with 12 points from 11 games and RCB fancing their chances of mathematically making it to the knockout stag, it will be interesting to see who will emerge victorius

Players to watch out for

KXIP: KL Rahul has been the consistent performer with the bat for the Punjab side. He is currently third on the leading run scorers charts with 537 runs from 11 games and the home side  will be hoping that he fires against his former side in the crunch game.

RCB: Umesh Yadav will once again hold key to Virat Kohli-led RCB’s bowling attack. The team India pacer has picked up 14 wickets in 11 games. RCB will be banking on him to picked up early wickets in powerplay and final overs. He will also have the responsibility of stopping KXIP openers Chris Gayle and KL Rahul.

The match is scheduled to start at 8 P.M. IST on Tuesday, May 14th.

The match will take place at Holkar Stadium, Indore.