Sports   Cricket  14 Nov 2019  Indian pacers run through Bangladesh defence, get them all out for 150
Sports, Cricket

Indian pacers run through Bangladesh defence, get them all out for 150 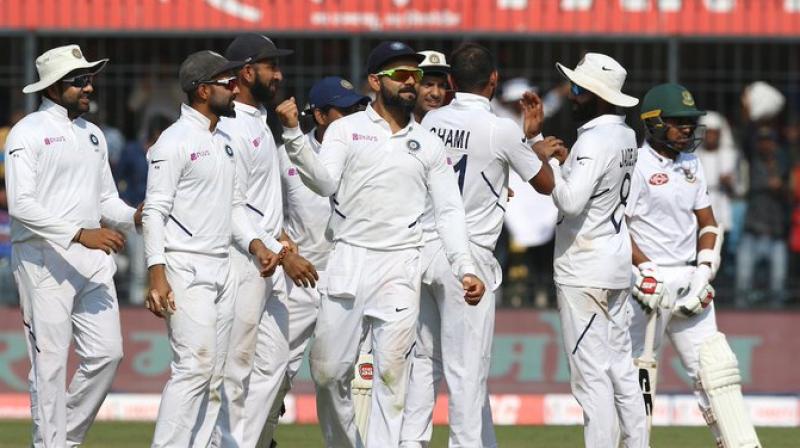 Mohammed Shami led an inspired pace bowling attack as India dismissed Bangladesh for 150 on the first day of the opening Test on Thursday. (Photo:BCCI)

Indore: Mohammed Shami led an inspired pace bowling attack as India dismissed Bangladesh for 150 on the first day of the opening Test on Thursday. Shami claimed three wickets, while fellow pacemen Ishant Sharma and Umesh Yadav took two apiece to pack off the tourists early in the final session in Indore.

Mushfiqur Rahim put up a brief resistance with his 43, but Shami struck on successive deliveries to stop the Bangladesh tail from wagging. Shami bowled Mushfiqur and then trapped new man Mehidy Hasan lbw, prompting the umpires to break for tea. Sharma struck on the first ball after the break to get Liton Das caught for 21.

Taijul Islam then played out Shami's hat-trick ball, but was later run out for one. Yadav cleaned up Ebadat Hossain to wrap up the innings in 58.3 overs. Yadav, Sharma and Shami took wickets in the morning session before Mushfiqur and skipper Mominul Haque put on 68 for the fourth wicket.

Spinner Ravichandran Ashwin broke the stand after getting Mominul bowled for 37. It was his 250th wicket in home Tests, and he added to the tally by then bowling  Mahmudullahfor 10.

At the start, Bangladesh endured three maidens before getting their first run through Imrul Kayes, but he managed just five more before becoming the first wicket. Sharma struck in the next over to send Shadman Islam back to the pavilion, also for six.

Batting remained tough for Mominul and Mohammed Mithun, who was trapped lbw for 13 by Shami finding swing and seam movement. It could have been worse for Bangladesh had India not been sloppy in the field.

Rahane, who spilled three chances at first slip, dropped Mominul when he had made only three, and Mushfiqur survived when put down by skipper Virat Kohli at third slip.

Bangladesh, who lost the preceding Twenty20 series 2-1, had a troubled build-up when star player and captain Shakib Al Hasan was banned for two years, with one year suspended, for failing to report approaches by bookmakers. The series is Bangladesh's first in the new world Test championship currently led by India.