Last month, the number one ranked Test side completed a 3-0 clean sweep against South Africa. 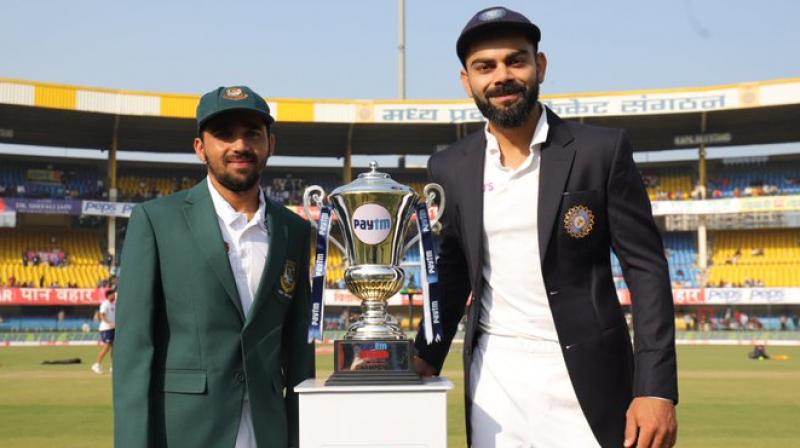 After sealing the T20I series 2-1, India would look to thrash a depleted Bangladeshi side 2-0. Bangladesh, who nearly came close to registering their series win over the Indians, will now face an Indian team, which is full of confidence. (Photo:BCCI)

Mumbai: After sealing the T20I series 2-1, India would look to thrash a depleted Bangladeshi side 2-0. Bangladesh, who nearly came close to registering their series win over the Indians, will now face an Indian team, which is full of confidence.

Last month, the number one ranked Test side completed a 3-0 clean sweep against South Africa. The team, which thumped the Proteas, is full of quality players. However, India’s bench strength is also good. The bench comprises of Shubhman Gill, Kuldeep Yadav, Rishabh Pant and Hanuma Vihari.

Nevertheless, the reserves might find it difficult to make it to the playing XI, as India wouldn’t compromise with their style of playing cricket. These four players also will not find a place in the playing XI, because India would want to increase their lead in the World Test Championship rankings, and hence they would not want to drop any of their in-form players right now.

Moreover, the reserve players are currently benched for the following reasons:-

Shubhman Gill – Despite getting a maiden call for the series against South Africa, the 20-year-old youngster was not included in the playing XI, because the victorious side had in-form players, whom India couldn’t afford to drop, just to give the Kolkata Knight Riders (KKR) batsman his maiden Test match.

However, with several big names being present in the dressing-room, the right-hander would definitely learn many valuable things from the experienced players. The India A captain deserved to be called for the Test series, because of his consistent performance as a captain in all-formats in the domestic zone.

Hanuma Vihari – Hanuma Vihari performed brilliantly during away Test series against West Indies. The Andra Pradesh-born cricketer, scored his career best maiden Test ton (111) and a 93 to cement his place in the Indian Test squad.

However, during the series against South Africa, the Delhi Capitals players scored just 10 in the first Test, following which he was replaced by Umesh Yadav in the second and third Test match.

Vihari is still lucky to be in the reserves, but, to get in the playing XI, he has to perform to his best, provided a chance comes his way.

Rishabh Pant – Though, the selectors have reiterated that Rishabh Pant will be selected for all the series, the 22-year-old had to be forced out of the playing XI, owing to his efforts with the bat and the gloves.

Pant has been failed to repay the faith the selectors and the team management had put in him. Following his dismal efforts during the second and final Test match against the West Indies, which India won 2-0, the Delhi Capitals opener was replaced by experienced and specialist wicket-keeper, Wriddhiman Saha.

Saha proved his worth by taking match winning, catches that changed the course of the match, during the Test series versus the Proteas. Hence, it is unlikely that the selectors and management will include the youngster.

Kuldeep Yadav – Kuldeep Yadav was supposed to the third and final Test against South Africa, but injury forced him to sit of the match. While, Shahbaz Nadeem got his chance to showcase his skills on his debut match.

Nadeem got his maiden call-up due to brilliant performances in the domestic zone. However, with Ravindra Jadeja performing well with bat and bowl, it is unlikely that Kuldeep will get his chance.

Moreover, the pitch for first Test is more suitable for bowlers in the ranks of Ishant Sharma, Mohammed Shami Umesh Yadav, Ravichandran Ashwin and Ravindra Jadeja.

Hence, Kuldeep has to wait and see if the condition, during the second Test match, which will be India and Bangladesh’s first-ever Day-Night Test game, suit to get a call-up for the Eden Gardens game.