After the home side made 416 the Kiwis were dismissed for only 166 in their first innings. 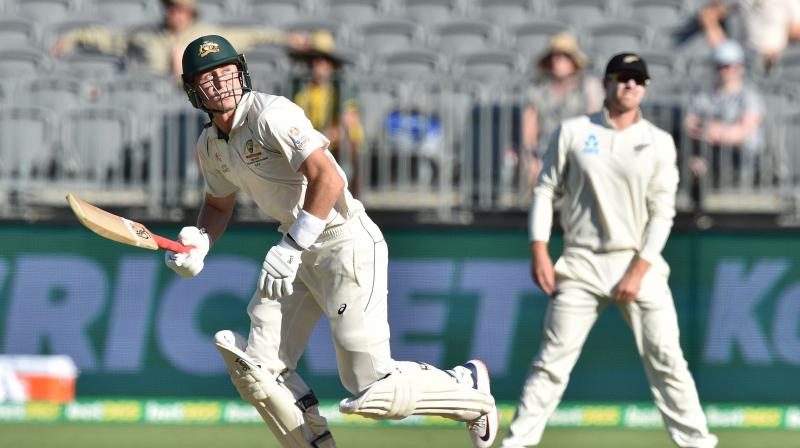 The home side were 75 for one in their second innings, with Joe Burns on 32 and Marnus Labuschagne on 18. (Photo: AFP)

Perth: Australia was building a massive lead over New Zealand on the third day of the first Test at Perth Stadium on Saturday.

After the home side made 416 the Kiwis were dismissed for only 166 in their first innings as Australian paceman Mitchell Starc terrorised their batsmen in continued sweltering conditions.

The home side were 75 for one in their second innings, with Joe Burns on 32 and Marnus Labuschagne on 18 - an overall lead of 325 with nine wickets still in hand and more than two days to play.

The Kiwis burned both their reviews early, unsuccessfully challenging not out decisions against David Warner (19) and Labuschagne.

Labuschagne, who made 143 in the first innings, was dropped on four by Colin de Grandhomme after skying a short ball from Neil Wagner into the leg side. De Grandhomme made good ground back with the flight of the ball from the square leg but couldn't hang on to the chance.

Warner batted with unusual caution until he was surprised by a short ball from Tim Southee and lobbed a catch to mid-on.

The visitors trailed by 250 runs on the first innings, but Australia didn't enforce the follow-on given the extreme heat and the absence of front line paceman Josh Hazlewood due to injury.

Starc claimed 5-52 and troubled the New Zealanders with his pace and bounce. Only Ross Taylor offered meaningful resistance with 80, but he was caught at slip by Steve Smith off the bowling of Nathan Lyon.

Smith took three catches, including his blinder on the second day to remove Kane Williamson for 34 and end a 76-run third-wicket stand with Taylor.

His third was contentious when de Grandhomme (23) was given out caught behind by umpire Aleem Dar to hand Starc his fifth scalp.

De Grandhomme tried to fend off a rising delivery and the ball deflected off his helmet to Smith in slips, with Dar believing it also brushed the batsman's gloves.

The batsman reviewed and although replays showed no conclusive evidence of contact with his gloves, third umpire Marais Erasmus said there was insufficient grounds to overturn the dismissal and Dar's decision stood.