Selectors to pick WC squad today to end No. 4 dilemma. 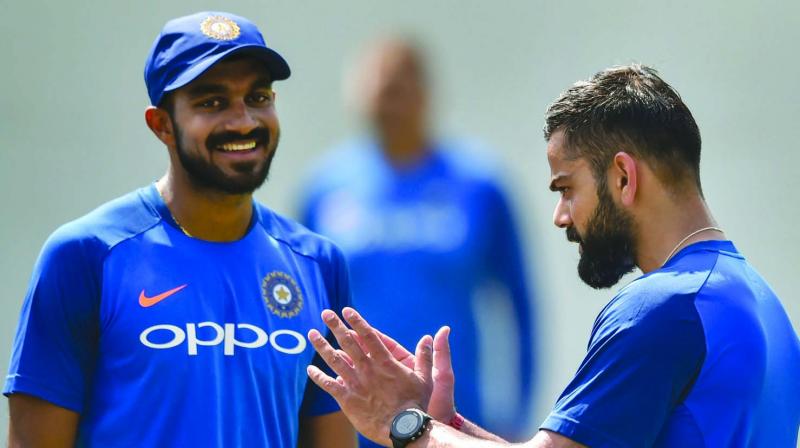 Allrounder Vijay Shankar (left) has got backing of some experts as No 4 batsman in the Indian team. He can be the second allrounder with Hardik Pandya.

Mumbai: Plenty of debate has been happening over the No 4 slot in the Indian cricket team and the debate is set to be settled when the All-India Senior Selection Committee meet here on Monday. The committee will pick the ODI team for the upcoming ICC Cricket World Cup 2019 to be played from May 30 to July 14 in England and Wales.

Many batsmen are in contention for the No 4 slot which was made his own by Ambati Rayudu but he didn't do well during the ODI series against Australia.

Now many names have been thrown up for the slot including all-rounder Vijay Shankar, wicket keeper batsmen Rishabh Pant and Dinesh Karthik. Few are also throwing their weight over talented Sanju Samson and some want experienced Mahendra Singh Dhoni to take up the responsibility in the key tournament.

Pant, Samson and Dhoni are having a good IPL while Karthik hasn’t been able to perform to his ability yet with the bat. But MSK Prasad, Chairman, Senior Selection Committee has indicated that IPL performances won’t be criteria for team selection.

The top order is fixed in Rohit Sharma, Shikhar Dhawan and skipper Virat Kohli. If they do count IPL performances then KL Rahul hit a blazing century just a few days ago, close to the selection committee venue.

Rahul is keeping also for Kings XI Punjab but 50-over game is different ball game. He can be though considered as third opener and seemingly has Kohli’s nod who will be present in the meeting before leading Royal Challengers Bangalore against Mumbai Indians in IPL game. Shreyas Iyer hasn’t been in the team for over a year though his name can be discussed. Kedar Jadhav seems to have fixed himself for the No 5 or No 6 slot.

With hot and dry conditions likely to be the feature during the World Cup in England, the selectors are likely to persist with three slow bowlers in Yuzvendra Chahal, Kuldeep Yadav and Ravindra Jadeja. Experienced off-spinners Harbhajan Singh and Ravichandran Ashwin have done well in the IPL but don’t seem to find favour in the team think tank. Leg-spinner Shreyas Gopal has impressed with the bowling and has finished a couple of matches for Rajasthan Royals with the bat.

In the pace bowling department Mohammad Shami, Jasprit Bumrah, Yuzvendra Bhuvneshwar Kumar seem a certainty with Hardik Pandya and Vijay Shankar as seaming allrounders. It remains to be seen whether they go for extra pacer in the form of experienced Ishant Sharma, tearaway pacer but inconsistent in white ball cricket Umesh Yadav or persist with variety in the form of left arm seamer in Khaleel Ahmed. They also can unleash Navdeep Saini as surprise factor.

Considering the reports of BCCI sending three extra players along with net ball bowlers to cover any injuries, Ishant, Saini and Khaleel’s case in the 15-member squad will be weakened though they can travel as reserves.