England once again showed the formidable firepower which will make them the team to beat in the looming tournament. 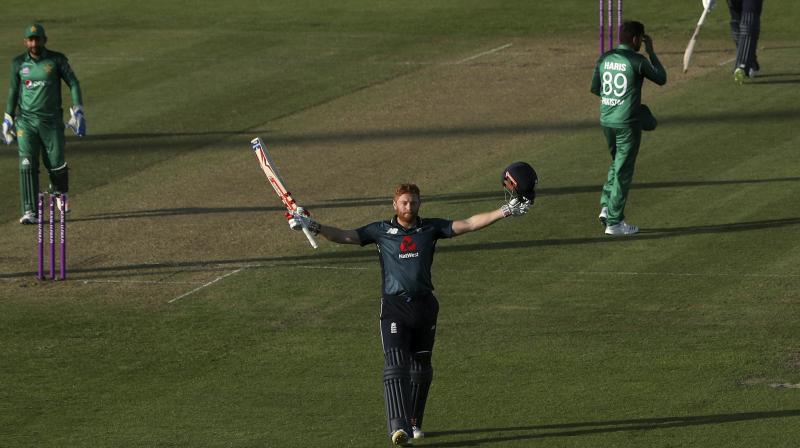 He smashed 128 from 93 balls after sharing a 159-run first wicket stand with Jason Roy, launching the hosts to their second-highest successful ODI run chase. (Photo: AP)

Bristol:  Jonny Bairstow’s magnificent century helped England make light work of chasing down a whopping 359-run target to beat Pakistan by six wickets in the third one-day international in Bristol on Tuesday as they took a 2-0 series lead.

Pakistan’s 358-8 on a flat pitch under blue skies looked to have given the tourists a fair chance of victory but it proved woefully inadequate as Bairstow led the England charge.

He smashed 128 from 93 balls after sharing a 159-run first wicket stand with Jason Roy, launching the hosts to their second-highest successful ODI run chase.

So easy did England make it look that a score of more than 400 would have been within their compass as there were still 5.1 overs left when skipper Eoin Morgan struck the victory run.

“Extremely proud, we felt that was on par, and Jonny and Jason were brilliant,” Morgan, who will lead England as favourites into the World Cup on home soil, said.

England had made 373 in their victory at Southampton at the weekend and once again showed the formidable firepower which will make them the team to beat in the looming tournament.

Openers Roy and Bairstow began tucking into the Pakistan attack with relish, racking up 74 from the first 10 overs and taking it to 159 in 17.3 overs.

Roy struck four sixes in his 76 while Bairstow, making batting look ridiculously easy, belted 15 fours and five sixes before he was eventually bowled by Junaid Khan.

Joe Root made a breezy 43 before Ben Stokes was joined by Moeen Ali to accelerate England towards victory.

Stokes was run out for 37 but it was already a lost cause for Pakistan’s dispirited attack as England romped to the joint fifth-highest successful ODI run chase.

England quick Chris Woakes had earlier reduced Pakistan to 27-2 with the wickets of Fakhar Zaman and Babar Azam but opener Imam-ul-Haq hit a superb 151 to enable the visitors to post a big score for the second match in a row.

They scored 361 in a losing cause at Southampton.

The first ODI in the series was washed out at The Oval.