Mushfiqur Rahim has played a stellar innings, holding it together at one end, while Tamim played the big shots from the other side. 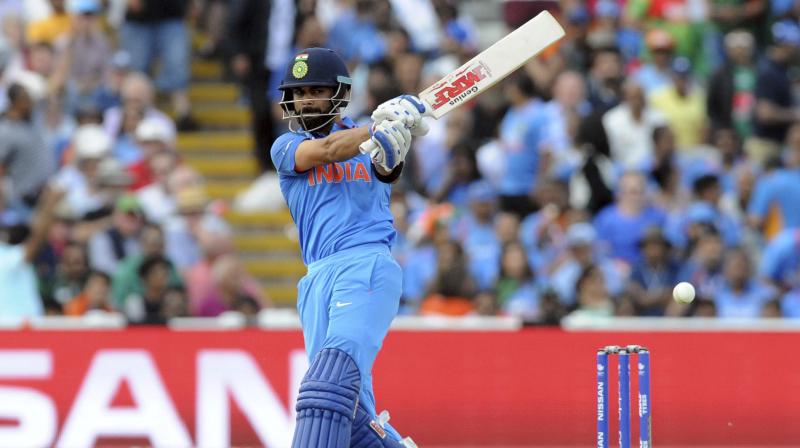 Birmingham: India completed a nine-wicket win over Bangladesh in the semifinal of the ICC Champions Trophy.

After Shikhar Dhawan got out for 46 early in the chase of 265-run target, it was Rohit Sharma (123 not out) and Team India captain Virat Kohli (96 not out) who took India through to victory. The duo put up an unbeaten 178 run partnership and set up a final showdown with Pakistan on Sunday.

Earlier in the match, Bangladesh managed to reach a total score of 264-7, with half centuries from Tamim Iqbal(70) and Mushfiqur Rahim(61). Bhuvaneshwar Kumar, Kedar Jadhav and Jasprit Bumrah took two wickets each as Ravindra Jadeja got the wicket of Shakib Al Hasan.

With this win, India have reached the final for the second time in a row.

Rohit Sharma and Virat Kohli continued to build up an unbeaten partnership of 101 as they inch closer to victory. India are too strong for the Bangladesh bowlers, as the only wicket the Men in Geen have taken is that of Shikhar Dhawan. With less than 100 runs for target, India is looking to finish off in a hurry.

+Virat Kohli reached his 43rd half century during this.

India continued their good show in the match finishing the 20th over at 124-1. Shikhar Dhawan, However Shikhar Dhawan departed in the 15th over when Mashrafe Mortaza got his wicket, falling just 4 runs of his half century. Rohit Sharma got to his 31st fifty, as he continues to build a partnership with captain Kohli.

+Rohit Sharma is unbeaten at 65, continuing his good form.

+Virat Kohli has scored 13 runs so far, as Shikhar Dhawan got out in the 15th over.

+Shikhar Dhawan got out for 46. He was caught by Mosaddek Hossain at backward point as captain Mashrafe Mortaza got his wicket

India have made a strong start in their reply, scoring 63-0 in 10 overs against Bangladesh in the semifinal. Openers Rohit Sharma and Shikhar Dhawan got the innings going, after  setting up a 63 run partnership. Right in the first ten overs, both the openers played spectacular shots, including a six by Shikhar Dhawan in the 8th over.

+ Rohit Sharma has played a brilliant knock so far, scoring 31 from 40 balls.

+ Shikhar Dhawan, too, has been going good, as he is unbeaten on 32 from just 20 balls.

+ Bangladesh had earlier scored 264-7 with Tamim Iqbal(70) and Mushfiqur Rahim(61) contributing to the team.

+ Kedar Jadhav had a good spell of 2-22 in 6 overs, dismissing both Tamim and Rahim

Bangladesh battled hard against a dangerous-looking Indian bowling attack, to post a total of 264-7 from their quota of 50 overs in the second semifinal of the ICC Champions Trophy, at the Edgbaston Cricket Ground, in Birmingham, on Thursday.

Opener Tamim Iqbal was the standout batsman for Bangladesh, as the southpaw notched-up a stellar 70 from 82 balls. The 28-year-old smashed seven boundaries and one six, before being bowled out by a straight delivery from part-time bowler Kedar Jadhav.

After the early wicket of fellow opener Soumya Sarkar and top order batsman Sabbir Rahman, Tamim and wicketkeeper Mushfiqur Rahim notched-up a 123-run partnership for the third wicket, to give Bangladesh some momentum.

While India looked out of sorts during this partnership, Virat Kohli brought on part-time spinner Kedar Jadhav, who did the trick, removing Tamim Iqbal in the 28th over, and Mushfiqur Rahim in the 36th over.

Despite the wickets however, Bangladesh ambled on, with the held of skipper Mashrafe Mortaza (30 not out from 25 balls), to post a fighting total of 264 for 7.

+ Mahmudullah (11), Mosaddek Hossain (10) are trying to steady the ship after an exemplary bowling performance by India.

+ Mushfiqur Rahim played a stellar innings, but was dismissed for 61, caught at mid-wicket by Virat Kohli off part-time spinner Kedar Jadhav.

+ Tamim Iqbal took the attack to India, scoring 70, but he was bowled sweeping by Jadhav

+ Jadhav has been a surprise performer with the ball, ending with figures of 2-22 in six overs.

+ Mushfiqur Rahim has played a stellar innings, holding it together at one end, while Tamim played the big shots from the other side. He has scored 55 from 71 balls (four fours).

+ Shakib Al Hasan has joined Mushfiqur at the crease, and is currently batting at 6 not out.

+ Tamim Iqbal gave a lot of momentum to the Bangladesh innings after a couple of early wickets, scoring 70, before he was bowled sweeping by part-time spinner Kedar Jadhav.

+ Soumya Sarkar was out on the second-ball for nought, bowled by Bhuvneshwar Kumar.

+ Sabbir Rahman was dismissed for 19, caught at point by Ravindra Jadeja off Bhuvneshwar Kumar’s bowling.