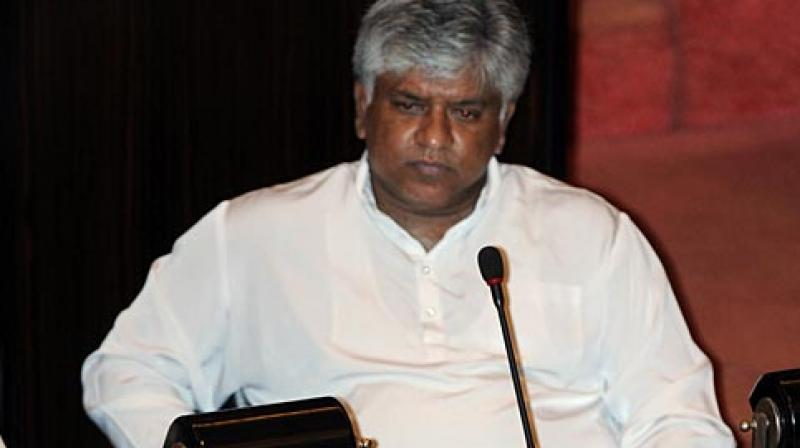 Ranatunga said he was in India giving commentaries during the pinnacle tournament and was in distress after the team lost the match against the Mahendra Singh Dhoni-led side. (Photo:AFP)

New Delhi : Former Sri Lanka skipper Arjuna Ranatunga has suggested that the ICC 2011 World Cup final between India and Sri Lanka was fixed and hence called for an investigation into the same.

India defeated Sri Lanka by six wickets with 10 balls remaining to complete a truly historic victory in front of hysteric crowd at the iconic Wankhede Stadium in Mumbai.

"Investigations should be done on the World Cup final where Sri Lanka lost to India. The ministers who are talking now need to make sure their actions speak louder than their words. The time has come now for these players to confess on what happened and investigations to be done", media reports quoted Ranatunga as saying in a video which he posted on his Facebook page.

The 53-year-old said he was in India giving commentaries during the pinnacle tournament and was in distress after the team lost the match against the Mahendra Singh Dhoni-led side.

"When we lost, I was distressed and I had a doubt. We must investigate what happened to Sri Lanka at the 2011 World Cup final," he said.

"I cannot reveal what happened on that day, but I would someday reveal the truth. So, I think we should hold an inquiry into this matter," he added.

Ranatunga, who is the Minister of Petroleum and Renewable Resources of Sri Lanka, said this in response to remarks made by former Sri Lanka captain Kumar Sangakkara who earlier questioned as to whose responsibility the 2009 Tour of Pakistan was arranged.

Chasing a stiff target of 274, Dhoni struck a brilliant 91 to mark April 2 as a historic day in Indian cricket history.

The hosts were in a spot of bother after they lost three quick wickets in Virender Sehwag, Tendulkar and Virat Kohli cheaply. But Dhoni, Gautam Gambhir and Yuvraj Singh rose to the occasion to steer India to a terrific win.

The duo of Dhoni and Gambhir added pivotal 109 runs for the fourth wicket before Gambhir was bowled on 97.

At the time when the left-handed opener from Delhi got dismissed, India still needed a run-a-ball 52 from 52 balls and the match could have swung either way. But Yuvraj and Dhoni batted superbly, using all their experience to chase down the target with rather ease.

Dhoni finished off in a fantastic fashion, hitting a big six over long on to Nuvan Kulasekara and giving Indian fans a moment that they could hardly ever forget in their lives.