The duo were earlier together in the IPL side Royal Challengers Bangalore. 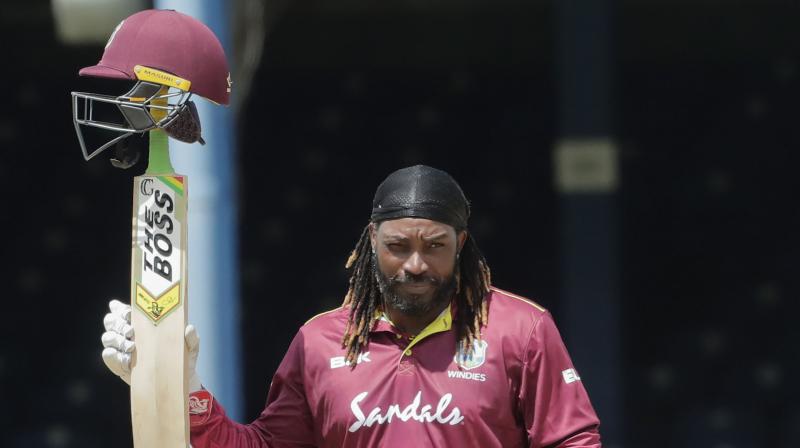 Indian captain Virat Kohli paid tribute to veteran West Indies batsman Chris Gayle, who appeared to have played his last match in the third ODI here, saying apart from his cricketing exploits he will also be remembered for his fun-loving and friendly nature. (Photo:AP)

Port-of-Spain: Indian captain Virat Kohli paid tribute to veteran West Indies batsman Chris Gayle, who appeared to have played his last match in the third ODI here, saying apart from his cricketing exploits he will also be remembered for his fun-loving and friendly nature.

Kohli described the 39-year-old Gayle as an icon and "gem of a human being" who was always there to help youngsters. The duo were earlier together in the IPL side Royal Challengers Bangalore.

"I would like to congratulate him for a great career, playing for the West Indies. He has done so much for West Indies cricket and he is icon all over the world. He is one of the nicest human beings around, that for me is his biggest quality," Kohli said after India's series-clinching six-wicket win under D/L Method in the third ODI here on Wednesday.

"Everyone knows about his cricket but I think the kind of person he is, so helpful with youngsters, so fun loving and always smiling even in the most pressure situations. For me, Chris Gayle the person is the best part of him. I have been fortunate to spend a lot of time as a friend and get to know him as a person. He is a gem of a human being and I think he can be really proud of that, firstly."

Gayle played the third ODI with a special '301' jersey -- indicating the number of ODIs he has featured in throughout his career, a record for any cricketer from the West Indies.

The Jamaican, who made 72 off 41 balls, was applauded by the Indian players as he walked off after being dismissed in the 12th over of West Indies innings. He raised his bat, helmet perched on top of it, and the crowd continued to cheer, wondering if it was the last time they would see him bat.

But after the game, Gayle dismissed suggestions that this was his farewell game.

"I didn't announce anything...any retirement," he said in a short video posted by Cricket West Indies, when asked whether he has retired from ODI cricket or not.

Asked if he will still be around, he said, "Yeah, until further notice."

He had earlier announced that the ICC World Cup in the United Kingdom would be his last international assignment, before revealing a change of plans towards the end of the marquee tournament.

During the World Cup, he said he wanted to play the ODIs and Tests in the home series against India, possibly setting up a farewell Test at his hometown Kingston. However, Gayle was not selected for the two-match Test series, which made it likelier that he might have played his last international match in the third ODI against India here on Wednesday.