Rain continues to play havoc at Port of Spain after Gayle’s sparkling knock. 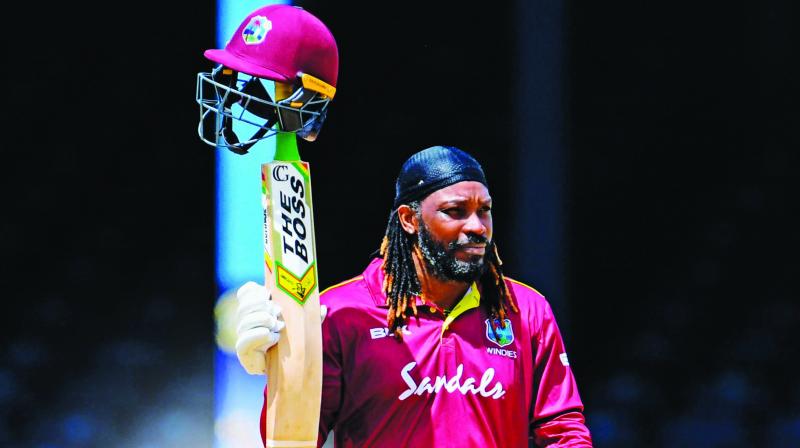 Chris Gayle acknowledges the crowd as he walks back to the pavilion. (Photo: AFP)

Port of Spain: Chris Gayle bludgeoned 72 off just 41 balls as West Indies reached 158 for two off 22 overs before rain brought the third and final match of their one-day series against India at the Queen's Park Oval to a halt on Wednesday.

Gayle, 39, went into the match having become the West Indies leading scorer in one-dayers in the second game at the weekend.

On Wednesday, he hit five sixes and eight fours as he and fellow opener Evin Lewis (43) put on 115 for the first wicket. Gayle, who was playing his 301st ODI match, donned a jersey with the number 301 on it on Wednesday.

India hold an unassailable 1-0 lead following the 59-run win via the DLS method in the second ODI at the same venue on Sunday.

Rain forced the abandonment of the first match in Guyana as a no-result last week.

Rishabh Pant is on a learning curve in a tricky journey called international cricket and his only endeavour is to improve each day, not only as a cricketer but also a human being.

The nascent international career of Mahendra Singh Dhoni’s heir apparent has been an eventful one — a few eye-catching knocks interspersed with indiscreet shot selections that invited a lot of critical comments.

With India having a packed schedule in the next six months, Pant was asked about how he sees things panning out for him. “Every match is crucial for me and it is not about the next six months. Everyday of my life is crucial and I want to improve both as a cricketer and as a person. That’s what I am looking forward to,” Pant said.

He hit an attractive half-century in the third and final T20 but some of his dismissals after getting set have left a lot to be desired. “I have been getting out after getting set, so I want to play normal, positive cricket that can help my team win matches,” Pant said.