IND vs BAN 1st Test: India finish at 493-6 against Bangladesh at stumps on day 2

Ravindra Jadeja and Umesh Yadav were unbeaten on 60 and 25 respectively at the close of play. 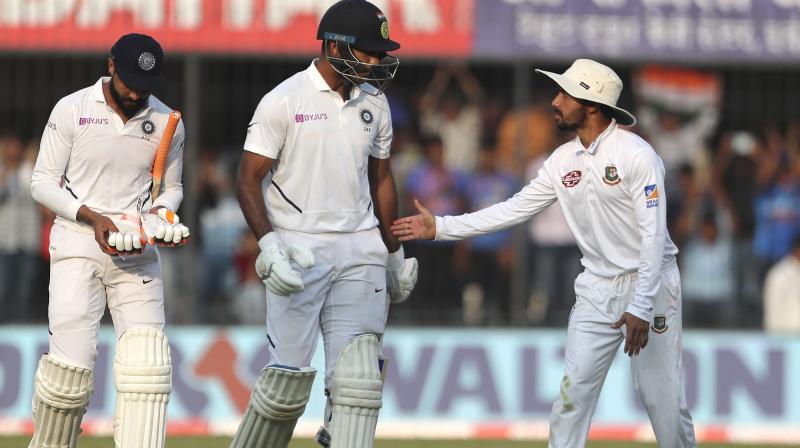 The 28-year-old opener, who has hit three tons including two double hundreds in his last five Test innings, hit eight sixes and 28 fours in his 243.

Agarwal passed 200 with a six off Mehidy Hasan and went on with his big hits until he was finally caught at deep mid-wicket by Abu Jayed off Mehidy. He left to another standing ovation.

India were 493 for six at stumps in response to Bangladesh's 150 all out on Thursday. Ravindra Jadeja, on 60, and Umesh Yadav, on 25, were at the crease promising more fireworks.

Jadeja celebrated with his trademark sword dance when he reached his half-century in 72 balls, while Yadav smashed three sixes in his 10-ball blitz.

Left-hander Jadeja kept up the attack after a 123-run partnership with Agarwal for the fourth wicket.

Agarwal also made 190 with Ajinkya Rahane, who shot 86, after the hosts resumed the day on 86 for one.

But Agarwal relentlessly hit the bowlers to the boundary after completing his second 200-plus score in eighth Test appearance since making his debut last year in Melbourne.

His previous best was 215 in the first Test against South Africa last month.

Agarwal's marathon knock eased Indian nerves after skipper Virat Kohli was out for a duck -- his 10th in 83 Tests -- in the first session.

Abu, who sent opener Rohit Sharma packing for six on Thursday, got Cheteshwar Pujara (54) caught at gully soon after the overnight batsman completed his fifty with a boundary.

But it was Kohli's wicket that briefly brought joy to Bangladesh after they successfully reviewed an lbw appeal rejected by the umpire. Replays indicated the ball would have hit leg stump.

India's pace bowlers, led by Mohammed Shami who took three wickets, dealt with Bangladesh on the opening day of the two-match series after the tourists won the toss but chose to bat first on a green wicket.