Virat Kohli should be the number one Test batsman in the world at the moment, except that the algorithms do not seem to agree. 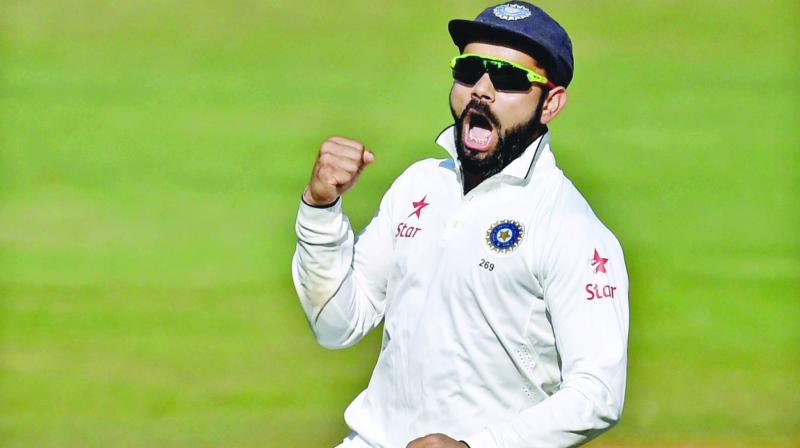 Virat Kohli is on a dream run this year.

The computerised ranking system refuses to acknowledge yet what we believe. Virat Kohli should be the number one Test batsman in the world at the moment, except that the algorithms do not seem to agree.  What we know beyond the rankings is Kohli is currently the master batsman of world cricket as he has done best in meeting the triple demands of the modern game. Not even Sachin Tendulkar could climb the triple peak of Tests-ODIs-T20 because his tryst with the shortest format was all too brief.

Kohli has the ability to stand far above his contemporaries because he has adapted best to the three formats. I think it was Sanjay Manjrekar who revealed this in the course of commentary in the series that the pattern of Kohli’s lofting the ball shows how he has conquered the formats despite cricket being the perfumed harlot, as the late Peter Roebuck used to say, and which would entice a player one day to bestow good fortune and dash him to the ground the next.

Where Kohli best plays the percentages is in Test cricket where he follows the oldest methodology in playing the ball along the ground. It is a pointer to his analytical ability that he can curb his natural talent in timing the ball right out of the park, which he uses extensively in ODIs and T20 cricket. He plays within Test parameters that have brought success to the greats down the ages. Now, Don Bradman was not accustomed to striking sixes, was he? He played his strokes all along the turf. What better example do we have of measuring success and assessing methodology than the batsman with a 99.94 average?

Kohli seems to be replicating Don’s deeds (101.51 average) and the streak of big scores as captain, including an unprecedented three double centuries — one away and two at home — for an Indian captain is clearly indicative of a new cricket Don who ascends the pantheon of Indian batting demigods now as a settled, more mature, less ‘angry young man.’ His phenomenal average as captain (65.50) behind only Kumar Sangakkara (69.60) and Steve Smith (68.11)  among the moderns is all the more reason why fans are now looking at him as a youngster who has taken Sachin’s place as the ultimate performer of his time.

There may be technical weaknesses which saw him endure the poorest imaginable tour of England where he averaged just over 13 in 10 innings in 2014, but then he is a far more accomplished batsman now and he could possibly alter his record in the Old Blighty whenever he gets to tour there next. The moving ball has historically been the Indian batsmen’s nemesis. However, so many like Sunil Gavaskar, Dilip Vengsarkar, Rahul Dravid and Sachin Tendulkar have conquered English and New Zealand conditions to prove they can cope with the moving ball and score off it too.

Kapil Dev was emphatic in picking Kohli as the breaker in the next few years of many records, including possibly the 400* of Brian Lara because he believes Kohli has the aggression and the quick-scoring abilities of a most modern batsman and the will and the daring to let loose which Sachin did not seem to possess. In the two home series this season, he twice crossed the double century mark, but there was no game situation in which he could have gone on to much more. A day might come on a pitch with run flow in which he could possibly match Virender Sehwag as the scorer of two Test triple tons.

The difference between Sehwag and Kohli would, however, be the more technical approach of Kohli in Test cricket. Having benefited from a topedged hook being put down at deep fine leg in the Vizag innings, the Indian skipper gave up the shot in the Mumbai double hundred. It is with the same abstinence that Kohli seems to have given up the penchant for the lofted drives in Tests.

A solitary six in his highest score to date in the Mumbai Test bolsters the argument of his conscious decision to be a Test batsman in the safe V than a more flamboyant version we see in limited-overs cricket, particularly in the Indian Premie League.