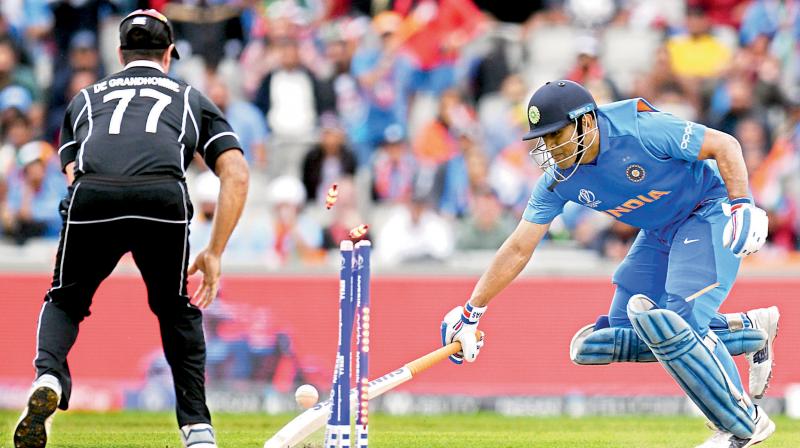 After India’s defeat, many eyebrows were raised as to why Dhoni was sent at 7, despite losing five early wickets. India’s then batting coach, Sanjay Bangar was also questioned, with various reports stating that Bangar decided to send Dhoni at number seven.

Speaking on Dhoni’s batting position, Ravi Shastri, during an interview with India Today stated, "Absolutely not (on whether India should have promoted Dhoni). Because at 5 for 3, had Dhoni gone, the game was over. But with Dhoni in the 48th over, with his computer out. Oh you were very much in the game but for that run-out."

After losing the toss, New Zealand chose to bat first and the team somehow got to a modest total of 239/8 at the end of 50 overs. India’s pursuit of 240 began with a quick flurry of wickets as Rohit Sharma, KL Rahul and Virat Kohli sent back early by the in-form Kiwi bowlers.

However, with Ravindra Jadeja's gritty knock of 77, combined with MS Dhoni’s cool and calm 50, India managed to put up a 116-runs partnership, which ultimately led India to 221 – 19 runs shy of victory.

Despite Dhoni’s cool and calm 50, he was still criticized as he took 72 deliveries to get to his half-century.

Shastri added, "So, Jadeja made things happen. It was a brilliant inning, we were nowhere. He made the game and there was the perfect orchestrator there, MS to finish it off. And I will tell you what, his computer was out. He knew who is going to bowl one over or six balls were calculated. It was all in his computer, but for that run-out but that's the game."

Speaking on the environment, Shastri said, "We guys had a lot to learn from them. It was a really tough pill to swallow. I don't think anyone spoke to each other for a day or so. It was hard, but you play sport. The men play this game. Proper men. Learn from that experience and move on. That's why I respect this team."