As the visitors were batting during the first innings of the second Test, Kohli was caught swearing on the stump microphone in Centurion. 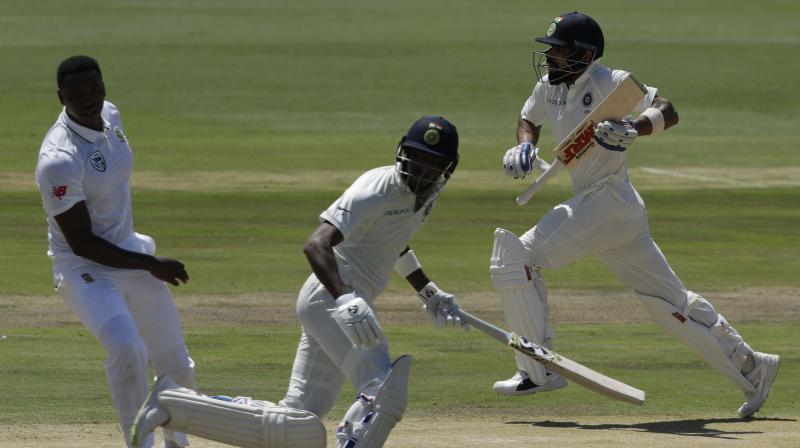 Centurion: India captain Virat Kohli is usually known for his leadership skills, and motivating his teaamates to do well.

As the visitors were batting their way through in the first innings of the second Test, Kohli was caught swearing on the stump microphone at the SuperSport Park in Centurion.

The incident occurred just before the Tea break on Day 2, Sunday as the scoreboard read 80-2 in India’s favour with Murali Vijay batting alongside Kohli.

“Shaam tak khelenge, inki g***d fat jaegi” (If we can play until the evening they will be scared ****less”),” the stump mic caught Kohli saying.

But the Proteas soon bounced back on the final session of the day, claiming three Indian wickets to take the momentum away from the hosts.

When India were five wickets down on Day three, the dashing right-hander was involved in another interesting conversation with all-rounder Hardik Pandya.

It took place during the 60th over of the morning session, with Vernon Philander into the bowling attack. Kohli and Pandya were trying to decode the in-swinging and out-swinging deliveries bowled by Philander.

Kohli: Yahan pe change kiya (He changed it in this delivery)

Hardik: Andar ke liye leke hi bhaagaa tha (He started to run with the one that would drift in)

Kohli: Jo leke niklega agar change karega toh uska opposite hai (The side of the ball he runs in with, if he changes, the movement will be opposite)

Hardik: Main bataaun aapko? (Should I tell you on what he is doing?)

Kohli: Nahin nahin, mujhe dikha, main bataa raha hun. (No, no.. I picked it, I am just telling you the strategy)

But that did not end there. With a final wicket to go down, Kohli and Ishant Sharma were partners at the crease. The India skipper was also caught referring to the speedster as Lambe (Hindi slang for a tall guy).

Kohli was caught using words like “Shabaash Lambe” and “Sambhal Lambe” on the stump mic during their partnership together for the ninth wicket.