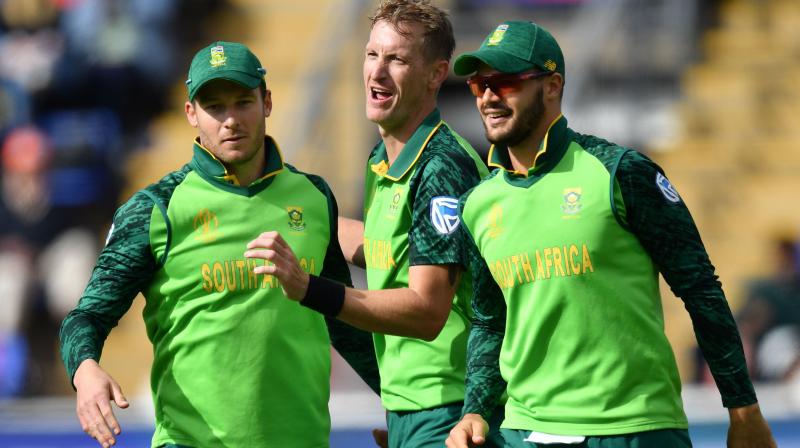 Morris' new approach has brought him consistency, something that South Africa's attack as a whole have been striving for (Photo: AFP)

The Proteas finally banked their first victory of the Cricket World Cup with a nine wicket win over Afghanistan here on Saturday. And Morris played his role, with 3/13 his best figures of the tournament.

The 32-year old all-rounder was a late addition to Faf du Plessis' team, replacing Anrich Nortje, who was ruled out with a hand injury.

And Gibson, a former pacer himself, has worked hard to establish his place in a squad that have been hit with injuries to their frontline bowling attack, Dale Steyn flying home with a shoulder injury and Lungi Ngidi still on the sidelines with a hamstring problem.

"There are a lot less worms in my head on the cricket field these days. The job I was given by Ottis was quite a clear-cut one. If I stick to that, it's a job I think I can do," said Morris.

"I have worked quite nicely with Ottis in the last two weeks. We have found something in the run-up that we've changed. That's given me a lot more rhythm and more balance at the crease. It's coming on nicely for now.

"I try not to bowl as fast as I can because that's when I tend to break. It's just about finding rhythm, hitting the wicket and not trying to do too many things."

Though Morris opened the bowling against India, he usually comes in at first or second change where has the dual task of containing the opposition's run-rate and taking wickets.

In the past, Morris focussed more on bowling fast but now he is working on subtle skills to ensure he stays injury-free.

Morris' new approach has brought him consistency, something that South Africa's attack as a whole have been striving for and may have found in their win over Afghanistan. After Afghanistan scored 33 runs in the first 5.5 overs before the first rain delay in Cardiff, Gibson scolded his bowlers for being a little too wayward. They returned with more focus.

"At the first rain break, the bowlers got a bit of a slap on the wrist. We were told we need to be more consistent in what we are doing and that we don't need to try too much," added Morris.

"After that rain break, we came on and we were a lot more consistent, a lot more at the batters and everything in the field just clicked for us. We needed a little bit of a pep talk from the coach and that was quite good."

South Africa then took two Afghan wickets before another rain delay, after which they forced a collapse of five wickets for eight runs in 29 balls, taking advantage of Afghanistan's penchant for playing their shots.