A sudden collapse is becoming a worrying trend for Afghanistan, who fell from 66 for no loss to 70 for 4 against New Zealand last week. 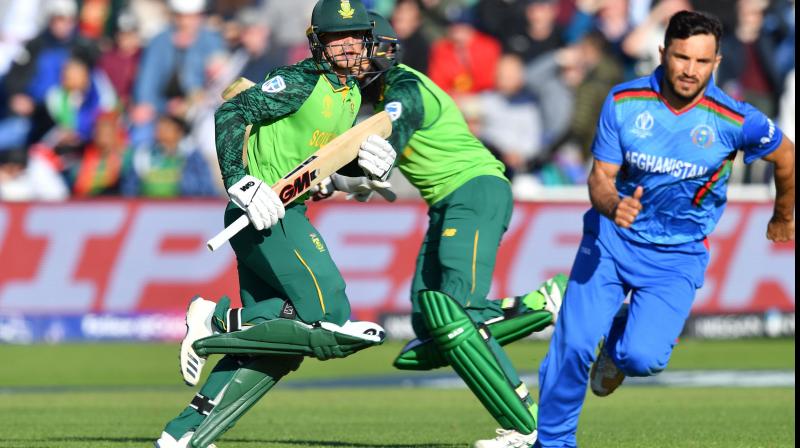 Another collapse saw them go down to South Africa by nine wickets in a World Cup match. (Photo: AFP)

Cardiff: Afghanistan captain Gulbadin Naib has urged his batsmen to remain calm in the middle and play full 50 overs after yet another collapse saw them go down to South Africa by nine wickets in a World Cup match.

Put into bat under cloudy skies, Afghanistan negotiated the new ball brilliantly, surviving Kagiso Rabada's natural seam and probing length but after a second rain delay, they lost five wickets for eight runs to eventually get all out for 125.

A sudden collapse is becoming a worrying trend for Afghanistan, who fell from 66 for no loss to 70 for 4 against New Zealand last week, and Naib asked his batsmen to control their nerves.

"Every time I'm saying to the batsman, control your nerves. We need calm cricket in the middle. Everyone is trying to put a score on the board so we have an opportunity to defend it," said Naib.

"We did not play a 50-over game because we did not last. We have played a lot of cricket in the last few years but there is pressure on the team. We lost the toss so we did not take responsibility enough and that was the difference," he said.

While Imran Tahir's (4/29) spin did the damage on a green surface, Afghanistan's leg-spin maestro in Rashid Khan, no.1 ranked T20 bowler in the world, failed to extract same advantage from the pitch.

"He (Tahir) is a world-class spinner but we are used to leg-spin in the camp, so we are playing it every day in the nets," said Naib.

The skipper said his team had a realistic chance against a lowly South AFrucan side but his players missed to grab the opportunity.

"South Africa is a good side but if you look for the last three games, they didn't play well. We had a good opportunity to play against them but we missed it.

"So credit goes again to their bowlers and also the conditions, it's bad luck we missed the toss. South Africa were just the better team," said Naib.

Meanwhile, Afghanistan batsman Hashmatullah Shahidi felt his team has enough quality to upset hosts England next week but the onus would be on the batsmen to score crucial runs.

"I can say if we play good cricket, we can beat any team but it depends on our batting," said Shahidi.

The 24-year-old agreed with his captain that the batsmen need to capitalise on a good starts.

"We are struggling. We have lost four in a row so we are disappointed. We tried to come back but things have not gone our way. We still have five games to go.

"We collapsed against Sri Lanka and New Zealand, losing wickets in a short space of time. We lost four wickets in two overs here. We started well but we lost wickets quickly, that was the main reason for the defeat," he admitted.

Shahidi said Afghanistan must quickly learn from their mistakes.

"We have played four games and they have all been on difficult tracks, on green tracks. But we know that runs can be scored, look at what Australia did against Sri Lanka.

"I hope the next games will be good for the batting. We are making small mistakes, we have to learn from them. We just had a plan to be calm. The first 30 or 35 overs is important and we wanted to take our time and play slowly but in the middle overs we collapsed," said Shahidi.