ICC CWC'19: India vs Pakistan; determining the loopholes and core of the team

India would like to maintain their winning streak, making the winning run against Pakistan 7-0. 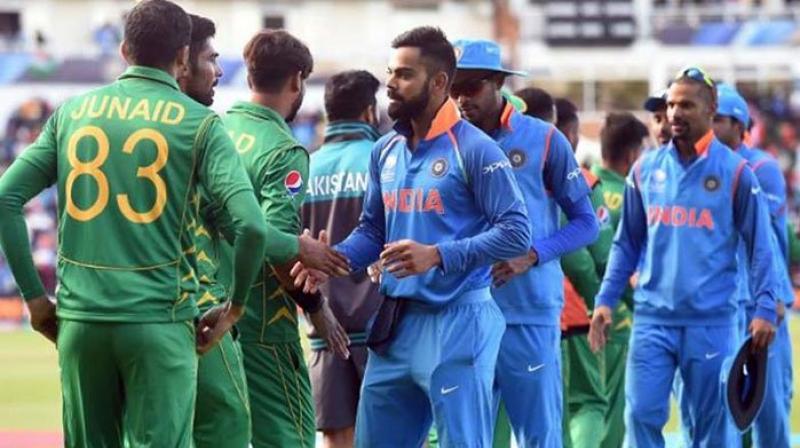 India who has remained unbeaten so far in the World Cup will look to pick up another win after enduring a wash out game along with New Zealand. (Photo:AFP)

Mumbai: The ‘mother of all matches’ is finally going to happen today as India is set to clash with its arch-rivals Pakistan. India who has remained unbeaten so far in the World Cup will look to pick up another win after enduring a wash out game along with New Zealand.

India would like to maintain their winning streak, making the winning run against Pakistan 7-0. However, before the Indian team gears up for its crucial match against an inconsistent Pakistan side, we dig deeper into the squads to determine the loopholes of both the teams.

Pakistan has maintained its status of being inconsistent. After suffering a thrashing at the hands of West Indies, Pakistan came back strongly to defeat a formidable England side. Following that match, the unpredictable side gained one point along with Sri Lanka due to a washout.

After the washout the Sarfraz Khan-led team again slumped to another defeat against a resurgent Australian side. For Pakistan, the match against India is a must win match as a defeat would ensure an exit from the marquee event.

Coming to Pakistan’s batting – The Pakistan batsmen have been in good form, with Babar Azam scoring 63 along with Mohammed Hafeez who also added 84 to help Pakistan post a massive total of 348 against England.

During that match only, skipper Sarfraz scored 55 along with opener Imam-ul-haq who also scored a vital 44 to help the Pakistan stun an invincible England side. Prior to the World Cup match against Pakistan, the Pakistani batsmen have been in prime form as all of the batsman scored vital knocks to help the men in green poses some kind of challenge to England side which thrashed the visitors 4-0.

Shahid Afridi remains the only Pakistan bowler who has two five-wicket hauls under his belt. Amir bettered his previous record best; his previous best was 4 for 28 against Sri Lanka in 2009.

Along with the scrappy bowling, the fielding too has been sloppy. The Pakistani players have dropped un-countable number of catches. If Pakistan wants to end India’s World winning run, they have to improve their bowling and fielding. Pakistan hasn’t been able to defeat India in the World Cup.

So far the Indian unit has had no big problems, their batting looks strong, with Rohit Sharma getting back into form after his unbeaten 122 versus the struggling Proteas, the top order looks all sorted. Barring the injury that Dhawan suffered during the match against Australia, the top order looks fine.

However, the team management will push KL Rahul up the order to open the innings with Rohit. KL already has notched up his maiden hundred during the warm up match against Bangladesh.

If we talk about the middle order, then, the middle order also has been in good touch with captain Kohli getting 82 against the Australians, and Mahendra Singh Dhoni also showed his prime form when he slammed a hundred along with KL Rahul to guide India to their victory during their warm up match versus the Bangladeshis.

Now, the real question remains is who will bat at number four – will it be Vijay Shankar, Dinesh Karthik or World Cup ousted player, Rishabh Pant?.

The spin twin pair of Kuldeep Yadav and Yuzvendra Chahal is not working at all. Only Chahal has been able to scalp wickets during crucial times, while Kuldeep has been conceding runs unnecessarily.

However, it remains to be seen if India plays Kuldeep in the next match or do they take Chinaman Ravindra Jadeja as he has the knack of picking wickets during crucial times. India can also take in Mohammed Shami who has a good reputation in taking wickets on flat tracks.

India also has an extra spinner in Kedar Jadhav, who has been out of form in terms of batting due to lack of match practice. While, in terms of bowling, Kedar was smashed all over the park in his one-over spell against Australia

However, seeing the pitch, we think that India’s likely to pick one extra batsman since the pitch is flat and more batsmen friendly.