Just after the conclusion of World Cup, Aussies will play the rivalry Ashes against England and the team wants star bowler Starc to be fit. 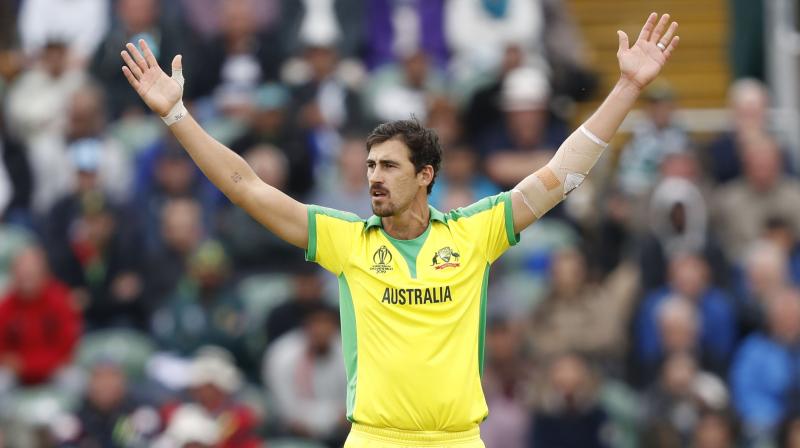 The left-arm pacer is leading Australian fast-bowling attack and currently holds the most number of wickets in the tournament. (Photo: AP)

London: Australian fast bowler Mitchell Starc wants to play every match for Australia in the ongoing ICC Men's Cricket World Cup, after his brilliant performance against Sri Lanka on Saturday as he clinched four wickets.

"If I'm fit, I'd like to play every game. Ultimately, it's not up to me, but it's a World Cup. I think you've got to play your best XI, depending on conditions and the team we play," Cricket.com.au quoted Starc as saying.

Just after the conclusion of World Cup, Aussies will play the rivalry Ashes against England and the team wants star bowler Starc to be fit ahead of the series.

The left-arm pacer is leading Australian fast-bowling attack and currently holds the most number of wickets in the tournament. He had 13 wickets in five matches so far.

"I just try to keep my one-day bowling very simple. I don't try to have all these different variations, I'm pretty focused on what I want to do. But I definitely won't be putting up my hand to rest," he added.

The 29-year-old is a persistent member of the team from the past couple of years and adds the experience in the Australian bowling line-up. Starc has not changed much in his bowling from the last World Cup, he only tries to give a breakthrough to his team.

"What I've added from the last World Cup is being able to play different roles. In different conditions, I might come back to try and take wickets and I might go for more runs, but I'm there to try and make a breakthrough," Starc said.

Talking about Test cricket, Starc stated that it is the top priority for him. For limited overs cricket, his game-plan is to keep it simple and bowl in the appropriate length according to the situation as it worked for him in this World Cup.

"Test cricket is still the pinnacle for me but the fact I've kept it pretty simple in terms of my game-plan for white-ball cricket has held me in good stead through World Cups," he added.

Australia will next play against Bangladesh on June 20 at Nottingham.