The hitman entered his third match of the tournament and the biggest clash against Pakistan with 179 runs under his belt. 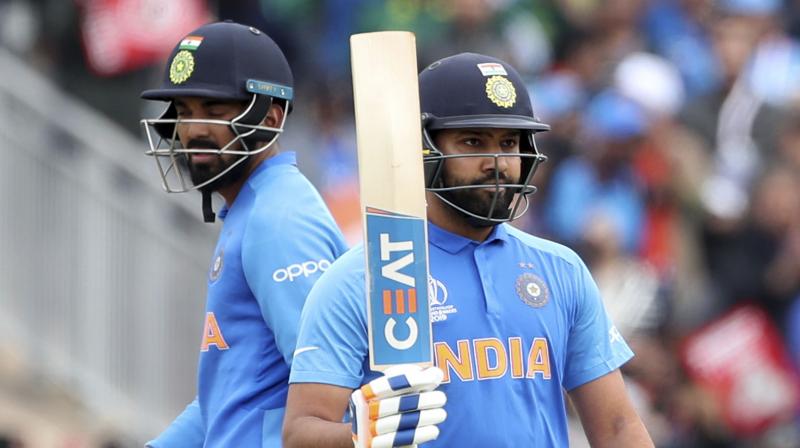 The hitman entered his third match of the tournament and the biggest clash against Pakistan with 179 runs under his belt.

Rohit along with KL Rahul got India to a flying start after sent to bat first. The duo formed a solid and record-breaking 136-run best opening stand against Pakistan.
Previously, former cricketers Navjot Sidhu and Sachin Tendulkar had formed a 90-run partnership during the 1996 edition.

The hitman on 99 ran for a single run off Shadab Khan and welcomed his ton off just 85 balls. India reached the 200-run mark inside 35 overs.

Rohit with his captain Virat Kohli took India to a comfortable position and formed a 98-run stand for the second wicket, before Hasan Ali put the break on India's ticking scoreboard as he got rid of Rohit for 140, leaving India at 234/2 in 38.2 overs.

Soon after rain arrived at the venue and the players walked off with India on 305/4 in 46.4 overs. After almost half-and-hour, the hover cover was removed. The umpires checked the 30-yard circle and declared mid-innings break of 15 minutes and no overs were lost.

Following the resumption, a quick Mohammad Amir bouncer helped Pakistan bag the pricey wicket of Kohli, who was caught behind for 77.

The World Cup debutant Vijay Shankar (15*) and Kedar Jadhav (9*) dragged India to post 336/5. Amir was the pick of the bowlers for Pakistan as he returned with figures of 3-47 in his 10 overs quota.