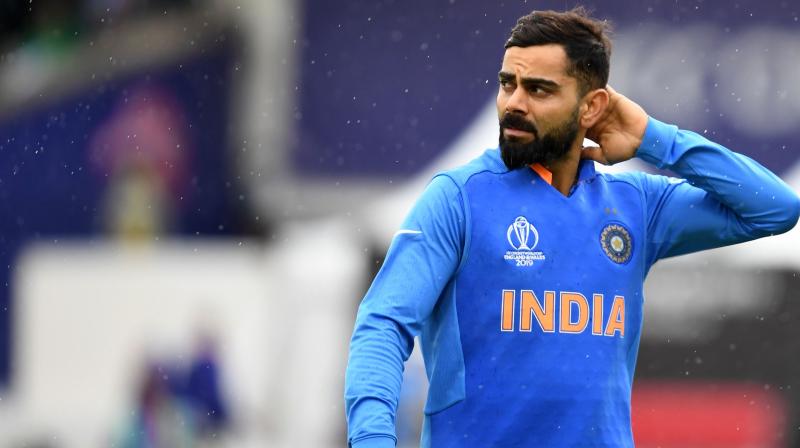 India maintain their unbeaten record against Pakistan in World Cups and win the game by 89 runs. (Photo: AFP)

An easy victory for India here. They maintain their unbeaten record against Pakistan in World Cups and win the game by 89 runs. Rohit Sharma grabs Man of the Match award.

The rain has interrupted the play again.

34.1: WICKET! Vijay Shankar gets his second. He bowls out Pakistan skipper Sarfaraz for 12. Pakistan in trouble.

26.6: WICKET! It's two in two for Hardik Pandya. He dismisses Shoaib Malik for a duck.

25.2: WICKET! It's two in two for Kuldeep Yadav as he dismisses Fakhar Zaman. Kuldeep has got rid of both set batsmen.

23.6: WICKET! Kuldeep Yadav finally breaks the partnership. Babar Azam is bowled by Yadav. It's a massive wicket for India and it might serve as a match-defining moment for the Men in Blue.

Bad news for India! Bhuvneshwar Kumar is ruled out of the match after suffering a hamstring injury.

4.5: WICKET! Shankar traps Imam-ul-Haq! Imam fell over trying to flick and was struck plumb in front of leg stump

Covers come off as rain stops. Match to resume at 7:10 pm IST

46.4: Play stopped because of rain

A brief spell of rain has just stopped.

Match likely to be affected by rain as sources report 10 to 40 per cent chance of precipitation. The ground already has damp spots from the previous day's heavy rainfall.

The Indian team bus has just arrived at the stadium.

TOSS: Pakistan wins the toss and chooses to bowl first

India goes into its fourth game of the tournament with a clear head and determination to win. After beating South Africa and Australia following a late entry into the tournament, India, though missing star opener Dhawan in the line-up, missed their chance to beat New Zealand due to a washout. Still standing at number four in the table, India have played at least one match lesser than every other team.

As said by skipper Virat Kohli, the final line-up will be decided closer to the match time, keeping the conditions of the pitch in mind.

Reports suggest India might make only one change, that is Vijay Shankar replacing opener Shikhar Dhawan.

Pakistan was also a victim of the showers. After being defeated by West Indies, but gaining a surprise win over hosts England, Pakistan faced a washout against Sri Lanka and had to settle for a single point. Following the loss of momentum, Pakistan lost against Australia even after a brilliant show by pacer Mohammad Amir.

Though the Pakistan batting line-up has been decent so far in the tournament, the bowlers, barring Amir and Wahab Riaz, have been disappointing, leading to Pakistan standing ninth on the table with four matches played.

The match is scheduled to start at 3 pm IST on Sunday. (June 16)

The match will take place at the Old Trafford, Manchester.

Star India has acquired the rights of telecasting the tournament, and the matches will be telecast on various Star Sports Channels.

The matches can be viewed live on Hotstar as well.