Mithali Raj’s sixth ODI hundred was the cornerstone in India’s total of 265/7 against New Zealand. 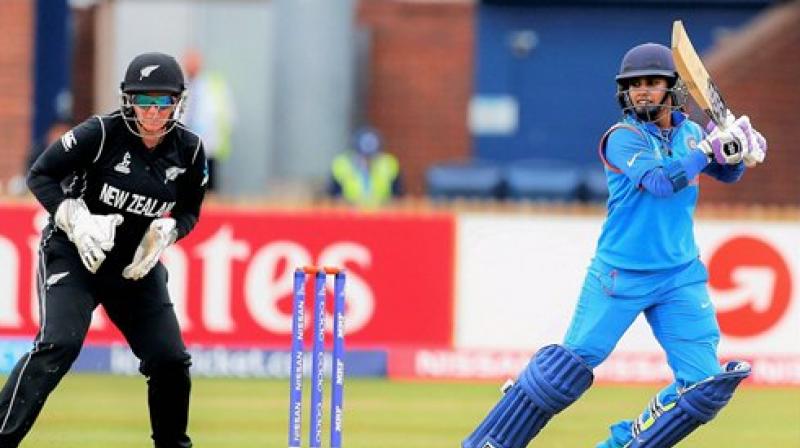 Derby (UK): Skipper Mithali Raj slammed a century before left-arm spinner Rajeshwari Gayakwad returned with a five-wicket haul as India crushed New Zealand by 186 runs to storm into the semi-finals of the ICC Women’s World Cup here on Saturday. Put in to bat, India recovered from an early wobble to score a challenging 265/7 in their final league match, riding on a 132-run stand between Mithali (109) and Harmanpreet Kaur (60) and a quickfire 70 by Veda Krishnamurthy.

India then produced a superb bowling display to dismiss the Kiwis for 79 in just 25.3 overs. Left-arm spinner Rajeshwari Gayakwad (5/15) was the peak of the bowlers with her five-wicket haul, while Deepti Sharma (2/26) scalped two and Jhulan Goswami (1/14), Shikha Pandey (1/12) and Poonam Yadav (1/12) picked one each respectively.

Chasing 266 for a win, New Zealand lost two early wickets with both openers Suzie Bates (1) and Rachel Priest (5) back in the hut in 3 overs.

At 7/2, Katey Martin (12) joined Amy Satterthwaite but the former was dismissed by Deepti in her first over as New Zealand were reduced to 27/3 in the 11th over.

Satterthwaite was then dismissed in the 18th over with Sushma Verma producing a brilliant stumping off Gayakwad’s bowling. The Kiwi’s 47-ball 26-run innings included four boundaries.

Katie Perkins (1) too was sent back quickly with Sharma cleaning her up as New Zealand lost half their side for 52/5 in the 19th over. Gayakwad then dealt two more quick blows, removing Sophie Devine (7) and Hannah Rowe (4) as New Zealand were looking down the barrel at 62/7 in 21.5 overs.

In the next over, Maddy Green was dismissed by Poonam Yadav, while Lea Tahuhu became the fourth victim of Gayakwad, who also cleaned up last batswoman Leigh Kasperek (0) to complete her five-wicket haul.

Earlier, India were reduced to 21/2 in the eighth over but a 132-run stand between Mithali (109) and Harmanpreet Kaur (60) for the third wicket brought them back into the match.

A brilliant quick-fire 70 off just 45 balls from Krishnamurthy, studded with seven fours and two sixes, then took India past 260. However, the highlight of the virtual knock-out match was Mithali’s sixth ton in her 184th match and her 109 came from 123 balls and had 11 fours.

Mithali, who in the earlier match against Australia became the highest run-getter in ODIs and first batswoman to reach 6000 runs, continued with her purple patch in the tournament.

She has already hit three half centuries and a 46 not out, besides Saturday’s ton, from the seven matches she has played so far.