Sports   Cricket  16 Jul 2017  Who is responsible for making it a melodrama?
Sports, Cricket

Who is responsible for making it a melodrama?

The CAC claimed that they had the spoken about this to Kohli and Shastri and got approvals from both. 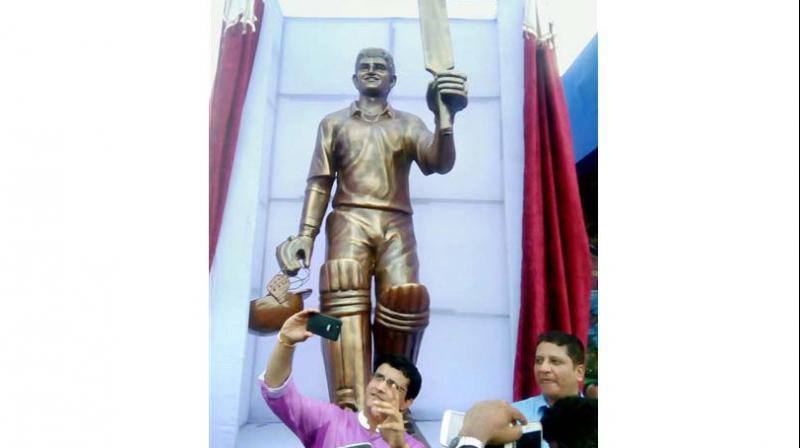 Sourav Ganguly takes a selfie of his own fibre statue at Balurghat Stadium, in West Bengal. (Photo: PTI )

It’s been six weeks since a hunt for the coach began after the falling out between Kohli and Kumble that saw the latter withdraw from the race, and every passing day has produced twists, turns, controversies, melodrama. To put it succinctly, it’s been confusion confounded.

Had this episode not shown up Indian cricket — including some of its biggest names — in such pathetic light, it would actually have been funny. But as the lead actors bumbled, grumbled, and fumbled their way through the processes of selecting the coach, it became a black comedy, devoid of humour.

The appointment of Ravi Shastri as coach followed a roller-coaster path. The Cricket Advisory Committee comprising Sachin Tendulkar, Sourav Ganguly and V.V.S. Laxman seemed to vacillate tantalisingly between “yes, maybe, no, yes” which left everybody flummoxed.

After the interviews were completed last Monday, Ganguly, speaking on behalf of the CAC, declared that the appointment could be deferred by a few days or even till after the tour of Sri Lanka. Ganguly said that the CAC had to speak to Kohli first to get his buy-in.

This was strange because if the captain could choose the coach, where was the need for the CAC at all? Moreover, Kohli’s preference (of Shastri) was widely known, so what could delaying the decision achieve?

As it happened, the Committee of Administrators jumped into the fray demanding that the coach be named immediately. Meanwhile, the BCCI, going by the CAC’s wishes, first announced that no decision on the coach had been reached, only to overturn their own statement by the end of the same day!

The CAC was obviously chagrined. Nevertheless, it appeared that the major hurdle had been passed. But complications arose as the CAC also approved appendages in the form of ‘consultants’ for batting (Rahul Dravid) and bowling (Zaheer Khan), which did not seem to sit well with Shastri.

The CAC claimed that they had the spoken about this to Kohli and Shastri and got approvals from both. But given the flip-flop statements given out subsequently by the CAC, CoA, BCCI and Shastri’s interviews in the media, this has not played out as smoothly as imagined.

Two things stand out as odd. Firstly, if the CAC had any compunction about Shastri as coach (remember, they had voted him out 12 months back), they did not have to choose him. There were four other applicants too, all of whom, according to Ganguly, had made impressive presentations.

Secondly, having made their decision in Shastri’s favour, to also appoint consultants was contrary to established practice of the chief coach having the prerogative to pick his own support staff. This is done globally so why foist people on him?

More pertinently, did the CAC have the jurisdiction to do this?

It is not anybody’s case that the celebrated trio in the CAC does not have the best interest of Indian cricket at heart. But the issue is not so much intent as propriety.

I doubt very much that Shastri would have objections to Dravid and Zaheer joining as consultants. Given the challenges ahead, especially playing overseas, their expertise would not just be invaluable, but welcome. But that would follow after he has his entire support staff in place.

The simpler, and fairer, method would have been to reach such understanding informally with Shastri and allow him the space to request for the services of these two stalwarts himself after he has worked out his gameplan on how he intends to take the team ahead.

As things stand, matters will hopefully be cleared on Monday when Shastri and Kohli are in town and finalise the personnel of the support staff. But this unholy and unnecessary rigmarole has painted a poor picture of how Indian cricket is being run currently. There has been a clear jostling for power between the CoA, BCCI (and factions within the Board) and the CAC and none have come out smelling of roses. Sadly, the CAC worst, given the profile of people involved.

Not quite cogent and justly authoritative as everybody assumed they would be, but a vacillating and confused panel. It now looks eminently dispensable.