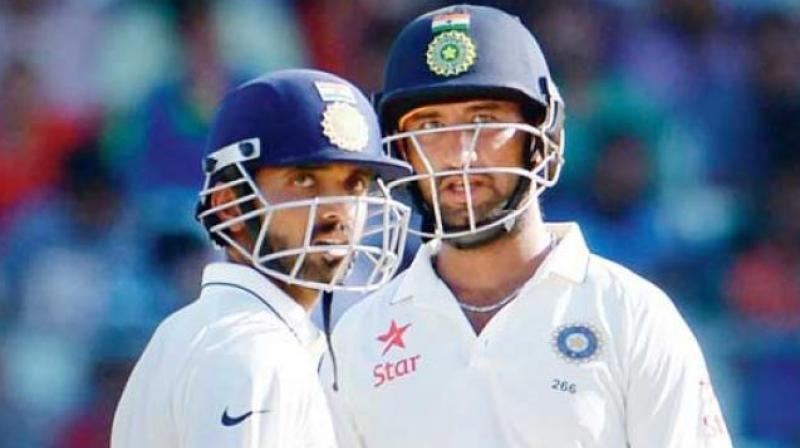 A win in the Test series starting August 22 will be the first time that India would have won across all formats on Caribbean soil. (Photo: AFP)

Coolidge: Test specialists Cheteshwar Pujara, Ajinkya Rahane along with a well-rested Jasprit Bumrah will be aiming for some quality game time when India take on West Indies Cricket Board XI in a three-day warm-up game starting on Saturday ahead of two-match series.

With skipper Virat Kohli sustaining a right thumb injury during the third ODI, the team management would like to exercise precaution and may be rest their best player before World Test championship opener.

Kohli has been in phenomenal form and has led India from the front in the limited-overs series. After scoring 106 runs in the three T20s, Kohli garnered 234 runs, including two centuries, in the two ODIs while the first one-dayer was called off due to rains after playing 13 overs.

After whitewashing West Indies 3-0 in the T20 International series, India continued their winning spree and pocketed the three-match ODI rubber 2-0. A win in the Test series starting August 22 will be the first time that India would have won across all formats on Caribbean soil.

For one of India's batting mainstays in longest format, Pujara will be playing a competitive red ball game after a good six months having last appeared in the Ranji Trophy final for Saurashtra a good six months back.

Rahane, skipper Virat Kohli's deputy in this format, didn't exactly set the English County on fire scoring only 307 runs in seven games with a hundred and a fifty and sub-par average of 23.61.

Rahane has had a prolonged bad patch in Tests also and this tour will be crucial for the Mumbaikar and a good hit in the warm-up is the kind of start he would be looking at.

Bumrah, who had a strenuous six months till World Cup has now freshened up and the practice game would be more about hitting the straps and getting some rhythm back after a month-long rest.

The practice game will give a chance for the players who are already here in the West Indies to shift from limited overs to five-day format and from white-ball to red-ball cricket.

On the batting front, Rohit Sharma and Rishabh Pant would desperately look for runs after a below-par limited overs leg. Rishabh for one would be more keen on a hit as his understudy Wriddhiman Saha has already hit two half centuries in the A games and is no doubt considered a far better keeper.

Mayank Agarwal is certain to open in the Tests but it will be a toss up between Hanuma Vihari (originally a middleorder batsman) and KL Rahul, who has not been in best of forms in this format.

Pacers Umesh Yadav and Ishant Sharma too would look to impress the team management with a fine show in the practice game ahead of the two Tests.

India's spin department is expected be led by the duo of off-spinner Ashwin and left-arm spinner Ravindra Jadeja.

Since it will not be an official first-class game, all the batsmen in the Indian squad are likely to spend some time in the middle to have a feel of the red ball. All the bowlers likewise will also roll their arms to get used to the longer format.

The World Test Championship is a league which is being contested by nine of the 12 full members countries of the ICC. It is a two-year cycle, the first of which started on August 1 with the opening Ashes Test at Edgbaston.

The group phase officially began on July 16 and will run until March 31, 2021 after which the top two teams will contest a final.

And being the number one side in Test cricket at present, India would definitely start as one of the favourites to win the Championships.