The former Australia captain enjoyed a remarkable series in England, scoring a total of 774 runs in just seven innings. 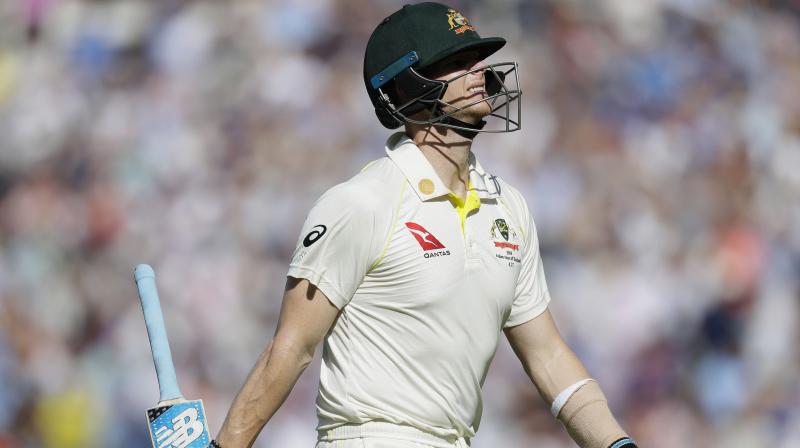 Steve Smith returned to international cricket to a chorus of boos but he walked off the pitch at the Oval to a standing ovation after a summer of Ashes redemption. (Photo:AP/PTI)

London: Steve Smith returned to international cricket to a chorus of boos but he walked off the pitch at the Oval to a standing ovation after a summer of Ashes redemption.

The former Australia captain enjoyed a remarkable series in England, scoring a total of 774 runs in just seven innings and played a pivotal role in his side's two victories in the drawn series.

The 30-year-old made his official return to international cricket in June at the World Cup after serving a year-long ban for ball-tampering and was booed by the crowd in Bristol.

Smith had a decent campaign in the 50-over showpiece but did not set the world alight as Australia reached the semi-finals, where they were beaten by eventual champions England.

But he changed gear when the Ashes started, seemingly hungry to make up for lost time as he dominated the England attack, making two centuries in Australia's comfortable win in the first Test at Edgbaston.

Asked when he felt he was back to his best, an exhausted but "proud" Smith said it was after his first innings at Edgbaston, when he rescued his side, who had stumbled to 122-8.

"That gave me a lot of confidence," he said. "That was probably my favourite innings of the whole series that I played.

"The first Test match, as we know, is always incredibly important in an Ashes series and to sort of pull the team out of a bit of trouble at the time and give me that confidence straight up that I could slot back in and perform, that gave me a lot of confidence.

"It was a long 18 months out of the game and I've got a lot of people to thank, in particular my wife." Smith's series was interrupted after he was felled by a Jofra Archer bouncer in the second Test at Lord's, forcing him to miss three innings.

But he returned at Old Trafford to make a monumental double century in another victory for Australia.

His 80 in the first innings in the final Test at the Oval was his 10th consecutive fifty in Ashes Tests.

Australia were chasing 399 to win the series in London but it was always a tall order and Smith was unable to produce a miracle, falling for 23.

His run haul is fifth on the list of highest tallies in an Ashes series.

The man at the top of that list, inevitably, is his late compatriot Donald Bradman, who scored 974 in seven innings in 1930. But the fact that Smith is even in the same conversation as the man widely regarded as the greatest batsman in history is testament to his genius.

Smith averages 64.56 after 68 Tests, second only to Bradman in the all-time list. Bradman himself averaged a mind-boggling 99.94 in his 52-Test career.

Regarded as the best "problem solver" in cricket today by Australia coach Justin Langer, Smith's batting is marked by an unorthodox shuffle across the crease and he is a fidgeter between deliveries, incessantly adjusting his pads and clothing.

But he has the ability of all great players to make batting look ridiculously easy and often appears to be playing a different game from his teammates.

Smith said he appreciated the reaction from the crowd in London, although he was disappointed not to have ended the series with a flourish.

"It was a nice reception as I walked off," he said. "It would have been nice if I'd had a few more runs under my belt in this game.

"I've given it my all since I've been here for the last four-and-a-half-months in every Test match that we've played and I didn't have much left to give today.

"I'm pretty cooked to be honest, mentally and physically. I'm looking forward to a nice couple of weeks' rest now before getting into the Australian summer."