The International stars will join Rohit Sharma as the undefeated Mumbai looks at the Vijay Hazare Trophy’s final berth after six seasons. 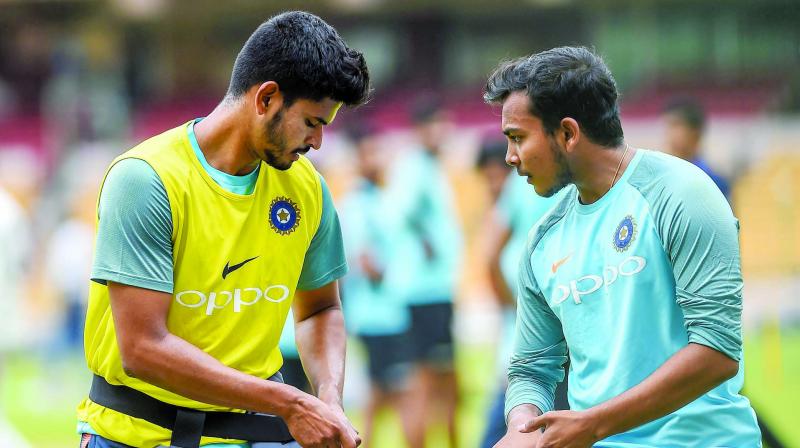 Shreyas Iyer (L) with India A and Mumbai teammate Prithvi Shaw during a practice session ahead of the first test match against South Africa A in Bengaluru in August. (Photo: PTI)

Mumbai will almost have full squad to choose from in the Vijay Hazare Trophy semi-finals in Bengaluru on Wednesday. This will be a rare occasion as stalwarts like Rohit Sharma and Ajinkya Rahane have been regular in the Indian team, especially in the last five to six years. Since last couple of seasons, Shreyas Iyer, Shardul Thakur and Prithvi Shaw have also been busy with India A and Indian senior team across different formats.

But Rahane, who led Mumbai in the first four league matches, is available after the two-match Test series against West Indies got over on Sunday. Shaw, who made a ton on Test debut and followed with half century and winning runs at Hyderabad, is also set to return to the side. Both Rahane and Shaw played in the first three matches and scored heavily along with Iyer.

Rohit played in the quarterfinal against Bihar and remained unbeaten on 33. He is the Vice-Captain of Indian team that will take on West Indies in the five-match ODI series from October 21. He has stayed back for semi-final, however is set to miss the final on October 20 if Mumbai qualifies. Thakur whose Test debut in Hyderabad lasted just 10 balls after he pulled his right groin, is not available due to injury.

“It is great that International stars are playing for Mumbai. It is a good experience for those (Mumbai) boys who share the dressing room with them,” Mumbai coach Vinayak Samant said.

Though the arrival of Rahane and Shaw means that two players will have to miss out, but Samant informed they will stay back.

“MCA has taken the initiative on my request to allow those two players to stay back. They are very much part of the team and will be benefited by the stalwarts,” he added.

Iyer, who was named deputy to Rahane at the start of the Vijay hazare Trophy, has successfully led the side after missing two games in between due to India A duties. He is set leaing the side again. Despite having being led by three captains in the tournament and missing their top players for some matches, Mumbai has remained unbeaten so far after playing nine matches, two of which got washed out.

The bowling, which was their weak point in the previous seasons, have improved. While Dhawal Kulkarni has provided experience at the top, Tushar Deshpande has shown flair. Shivam Dube has been a handy all-rounder and Shams Mulani has spun the teams out.

“We have been working on the bowling and they (bowlers) have been in good rhythm in this tournament. They have been hitting the right areas and have shown great discipline. Dhawal has led the way throughout with tight bowling. He might not have taken many wickets, but he has not given many runs. We have been able to maintain pressure at one end and take wickets from the other end. It has clicked for us so far,” he said.

Samant was also happy with the way Mumbai has fielded in the tournament but was wary of the weather. “We have had just short sessions of fielding to keep boys fresh and they have responded well. It has been raining here at the moment and we will have to see how it goes,” he said.