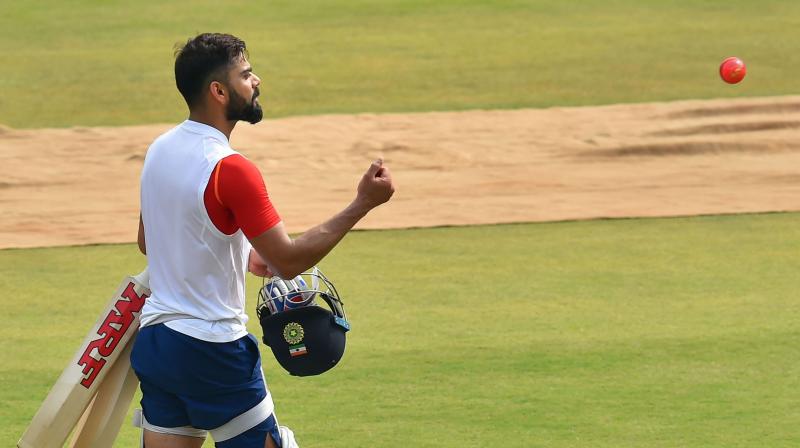 The army paratroopers will fly into the Eden Gardens and hand the pink ball to Virat Kohli and Mominul Haque. (Photo: PTI)

Kolkata: Army paratroopers will fly into the Eden Gardens to hand over a pink ball each to the two captains just before the toss of the historic day-night between India and Bangladesh, beginning on November 22.

Detailing out their plans for India’s first-ever pink ball Test, Cricket Association of Bengal secretary Avishek Dalmiya said: “The paratroopers will fly into the wicket with two pink balls. We have discussed the plans with the Army (Eastern Command).”

The Army will also play out the National Anthems of both the countries before the start of play. This will be followed by the ringing of the customary Eden Bell by Bangladesh Prime Minister Sheikh Hasina and West Bengal chief minister Mamata Banerjee.

Then at the 20-minute tea break, former captains and the galaxy of sports stars from other disciplines will be taken out on carts making a round of the ground along the boundary lines. During the 40-minute supper break, the CAB has also organised a talk show featuring the ‘Fabulous Five’ of Sourav Ganguly, Sachin Tendulkar, Rahul Dravid, Anil Kumble and VVS Laxman who will walk down the memory lane, delving on the epic 2001 Test win against Australia.

“This will be shown on the giant screen. It will be clearly audible to the spectators,” Avishek said. Following the first day’s play, players who played the first Test between India and Bangladesh will be felicitated followed by speeches given by the dignitaries including Sheikh Hasina.

“All the sellable tickets were already sold out online. We are now have left with a limited number of quota tickets. Now it remains to be seen if they will take them or not. We will only be able to evaluate on November 19,” Avishek said.

Bangladesh deputy high commission and the Kolkata Police will conduct two separate security inspections at the stadium and the team hotel on Saturday. Meanwhile, the first lot of pink balls were delivered on Friday.

“Three of them were given to (curator) Sujan Da. Wicket is a bit soft now. After the wicket is ready in a couple of days, he will test the ball,” joint-secretary Debabrata Das said.