The hapless Bangladeshi batsmen couldn’t stand the might of the Indian bowling attack as they succumbed to them. 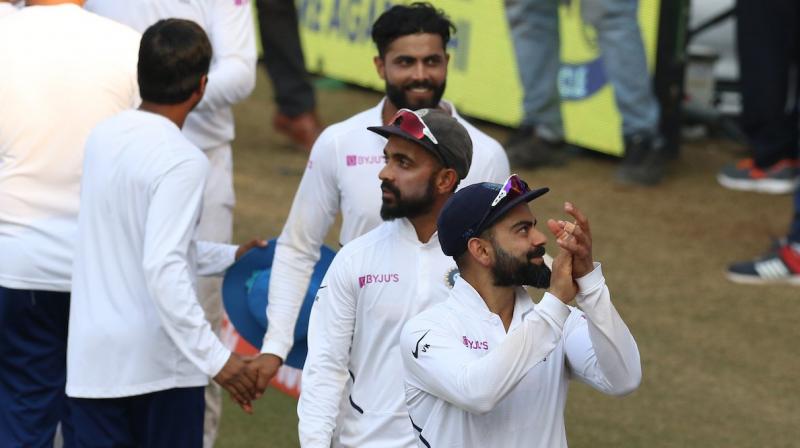 India defeated Bangladesh by an innings and 130 runs to win the first match of the two-match Test series. (Photo: Twitter/ BCCI)

Mumbai: India defeated Bangladesh by an innings and 130 runs to win the first match of the two-match Test series. The hapless Bangladeshi batsmen couldn’t stand the might of the Indian bowling attack as they succumbed to them. Bangladesh were bundled out for 213 runs.

Though the likes of Mushfique Rahim, Liton Das and Mehidy Hasan provided some resistance and stood their ground for some time, they eventually had to accept defeat. In the first innings too they were only able to muster a measly 150, to which India responded with humongous 493. Bangladesh had to score 343 and add more runs to it. But they failed to do it.

The Indian pace attack was at its premium best as the trio of Ishant Sharma, Umesh Yadav and Mohammed Shami proved too good for the Bangladeshi batsmen. The ever-present Ravichandran Ashwin too claimed three victims of his own. Only Ravindra Jadeja was unlucky to return without a wicket.

Shami was the pick of the Indian bowlers after a fantastic bowling display in both the innings of the match. He claimed 3 wickets in the first innings and 4 wickets in the second.

Throughout the match, there was never a moment where it felt as if Bangladesh had an upper hand, such was the domination displayed by India.

With this win, there were several records broken.

- This win makes it the most innings win for an Indian captain. This is Virat Kohli's 10th innings win. MS Dhoni has 9.

- The last time that India had three consecutive innings win was in 1993.

- This is just the sixth time that an Indian batsman has outscored an opponent in an inning. Mayank Agarwal 243 vs Bangladesh's 150.

- This is India's sixth consecutive win. The joint most for them in Test cricket.