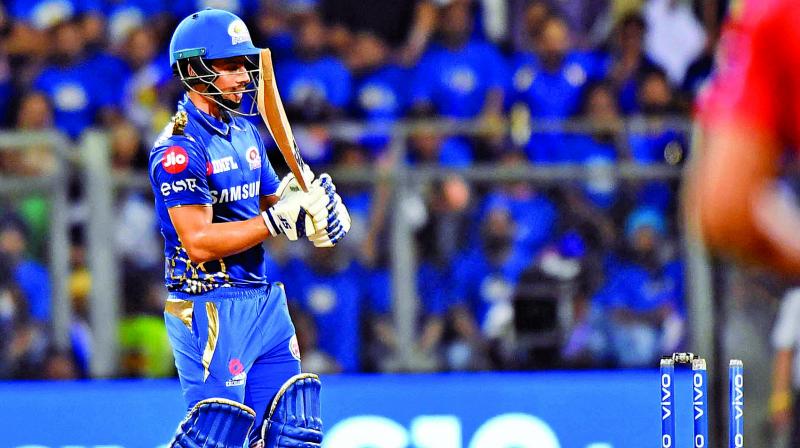 After warming the bench for Mumbai Indians for last five years, experienced Mumbai batsman Siddhesh Lad has been traded to Kolkata Knight Riders by Mumbai Indians.

“Mumbai batsman Siddhesh Lad will turn out for Kolkata Knight Riders in the upcoming season of the VIVO IPL following a successful trade by Mumbai Indians,” BCCI Honorary Secretary Jay Shah said in a press release on Friday.

Lad, who was with Mumbai Indians since 2015, played his first IPL game last season when he was included in playing the XI as captain Rohit Sharma’s replacement. Rohit was ruled out of the game against Kings XI Punjab owing to an injury.

Lad showed no nerves while batting after coming to open the innings with Quinton de Kock. He whipped his first ever delivery in IPL in to the second- tier and followed by four in same area. However, the chase was big and after playing few dot balls he went hard at Mohammed Shami exposing his leg stump. Shami hit the leg stump and the debutant had to walk back after making 15 runs.

“He (Siddhesh) is happy that KKR have shown interest in him and is hopeful he will get better chances to play. In Mumbai Indians he was getting money and also practicing well but these things aren’t enough as he aims to play for India he needs more games to make his case strong,” Dinesh who has also been coach of Rohit Sharma at Swami Vivekanand International School, Borivali, said.

KKR is co-owned by bollywood actor Shah Rukh Khan and have been IPL champions twice.

“It will be crucial season for him to get to play, do well and knock the doors of the Indian team. I have always wanted him to play Test cricket and he wants to do the same,” he added.

The 27-year-old Siddhesh was happy with his development as a cricketer in the Mumbai Indians squad but not getting to play season after season was making him and his family anxious. He finally played last season when Siddesh got cap from Rohit but he never got to play under Rohit when he came back.

Lad has been in good form for Mumbai in the last couple of seasons and wanted to show his skills in IPL also. Bought in 2015 auction along with Hardik Pandya, the wait was getting longer. Hardik and other contemporaries were not only playing in the IPL but also got their footing in the Indian team. He had been part of three IPL title wins of the total four by MI but without contributing much.

During this time however, Siddhesh became the man of crisis for Mumbai and even led the Ranji Team briefly. MI retained Siddhesh in 2018 auction but he will be happy man now with expectation to play getting increased than warming bench in star studded Mumbai Indians squad.