Chepauk has a hallowed place in history for India

Chepauk was also host to India’s first ever rubber win over England, in 1961-62 when ‘Lord’ Ted Dexter’s team were well beaten here. 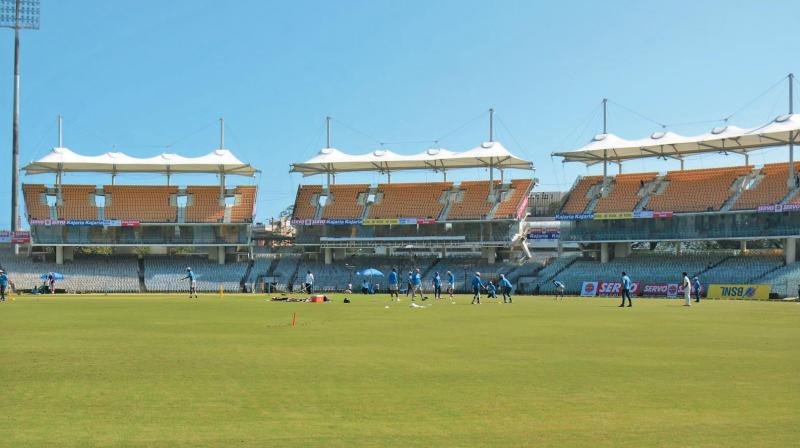 Chepauk has a hallowed place in Indian cricket history as Team India’s winning ways began at this ground way back in February1952. Having waited 20 years since Test recognition, the Vijay Hazare-led side won by an innings and eight runs with spinners Vinoo Mankad (8/55 & 4/53) and Ghulam Ahmed (0/53 & 4/77) doing the star turn even as Pankaj Roy and Polly Umrigar scored patient centuries to build an advantage against Donald Carr’s side (Nigel Howard’s touring team actually, but Carr led in Chennai). Chepauk was also host to India’s first ever rubber win over England, in 1961-62 when ‘Lord’ Ted Dexter’s team were well beaten here.

History sheds light on the 1952 pitch not being a turner. In fact, old timers used to recount that Vinoo, with his low-arm delivery style, was more effective on pitches not offering extravagant turn. The Test had a peculiar rest day on the very second day due to the death of King George VI. The name of British royalty is also commemorated here in George Town, named after his predecessor, King George V who came to India in 1911.

Designer pitches came at a much later date in history although Chepuak may have excelled in producing them in the 1970s. But, again, not always true as the controversial Tony Greig’s team wrapped up the series 3-0 here in 1976-77. What Bishen Bedi had to say about the groundsmen in that series may not make good reading in a family newspaper. To say the least, ‘Bish’ was livid with the curators and the Indian batsmen with the swing of ‘Vaseline’ John Lever. “The ball smelled very good,” said an impish cricketer of that time as the controversy raged over the use of an alleged movement-inducing substance.

Having seen England perish later in the early 80’s on the same ground with Ian Botham perishing in a lofted drive to the deep rather than the tame surrender of some of his colleagues, it was fascinating to see in history how Chepauk proved fair to both teams. Take the fantastic batting pitch in 1984-85. The Indian team, advised by the selectors to get on with it after the controversies of the dropping of Kapil Dev for the Test prior to the one here, got bowled out for 272 on day one, the runs made far too quickly for the team’s own good.

If that became an eminently forgettable Test for India after being pummeled in Graeme Fowler and Mike Gatting double hundreds, the Chepauk pendulum swung the other way on a designer pitch of the famous Ajit Wadekar-Azahruddin duo. It must be said that it was a young Tendulkar who batted as if it was just another day at the office in crafting a cool, calculated 165 to put England on the defensive. A sniff was all Anil Kumble and Venkatapathy Raju needed to bowl over a beaten side which had come with great hope after India had been soundly thrashed in South Africa.

It wasn’t so much history as sentiment that flooded a Chennai Test as Team England came back bravely to India in December 2008 after the infamous 26/11 terror attack on Mumbai. If apprehensions over terror defined the run-in to the Test, it was the spirit of life having to go on regardless of obstacles that was in the forefront. But one cricketer, who saw terror come closer than it should have as a classmate of his daughter lost a parent in the mindless Mumbai attack, played an extraordinary match-winning innings on the final day and then touchingly dedicated his century to the victims of 26/11 - Sachin Tendulkar.

It was a great contest on a very good cricket surface that Chepauk conjured up before switching back to a designer pitch which sent the Aussies hurtling to defeat in 2013. That pitch was unique in the sense it brought a new concept of pitch preparation with the surface on the wicket-to-wicket line rolled hard and rendered smooth so as to make the quicker bowlers come truly on to the bat while leaving the sides unprepared and affording spinners big turn. Enter the new Chepauk equation and predictably it became the trend in Indian pitches with a very clever slant given to aid the home team. Arguments about this may be endless, but then Team England is in no position to say much after having surrendered 3-0 already. Maybe, time has come a full circle since 1977 and the ‘Vaseline’ subterfuge.