A unique third double century within the confines of limited-overs cricket is not a mere statistical embellishment. 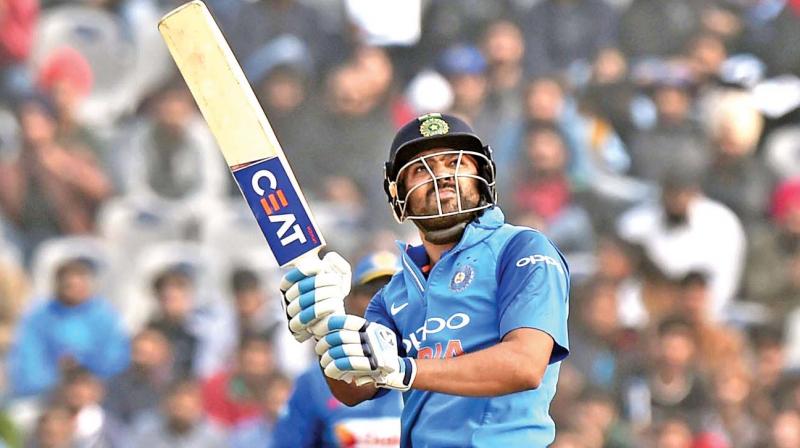 Rohit Sharma’s run of form has been extraordinary this year. He is in that zone now where performance perfectly matches talent. Not everyone may have been as patient about Rohit finding his true metier as he himself would have been. But then he has had some great years before in the five since 2013 in which he could be said to have discovered himself. But it is the current year which saw the fruition of his talent into such a destructive force the world has had to sit up and take notice.

A unique third double century within the confines of limited-overs cricket is not a mere statistical embellishment. Of course, opening batsmen are the ones who enjoy the best opportunity to make the double tons. In Rohit’s case, his world record is a statement of a man’s personal conquest of his self doubts as well as a reflection of the fact that he has a good understanding of his strengths and limitations. He is not a power player who can blast a ball into oblivion like say a Viv Richards.

Rohit has to be on top of his form to be able to time every attacking stroke to perfection even if his string of sixes seems to suggest otherwise and as if all of them were coming effortlessly from his sense of timing. See the manner in which he uses his feet innovatively to get his body into position to make the rhythm of his swing work in his favour. It is almost as if he is lining up a golf shot, except that he is doing it while moving his feet and body into position.

This is supreme artistry by someone who doesn’t have the power to bludgeon the ball into submission. He has to stroke it and when he does he produces poetry. There are great modern hitters who pummel the ball. Rohit still times it with a silken touch, which is why he is so easy on the eye. Let’s face it – he arrived on the scene as the next Sachin Tendulkar, having that kind of explosive talent to impress those who had seen the career of the greatest of Indian cricket achievers all the way through. If he didn’t live up to it early enough, it could be blamed on the devils in his mind rather than his technique.

Another coincidence in the journey of discovery of Indian talent for limited-overs cricket is that Rohit found his metier when he was pushed up to open the innings by MS Dhoni. It brings back memories of a morning in New Zealand when Sidhu woke up with a sprained neck and the history of world cricket changed with a certain Tendulkar opening the innings and scoring 84 with a fluency of touch that was eye-opening. It was like water gushing out of a dam when the sluices are opened — spectacular and awe-inspiring.

I read a beautiful line in a well-written agency copy capturing the essence of the batsman. The writer said — “Rohit Sharma’s batting is joie de vivre. It should be enjoyed for what it gives rather than what is expected of the man”. It is well-known that India has this problem of assessing everyone against a Sachinesque scale of accomplishment. Every talented player is expected to deliver almost every time without fail although this doesn’t happen in real life. The game of cricket is not like that. A batsman could be a destroyer but the game is a great leveller and it takes only one ball to bring a batsman down from the sublime to the ridiculous.

It’s a good thought that you savour an achievement rather than go on about whether the batsman can be said to have attained his full potential or not. Sport, like life, teaches us that. Now that Rohit is flowing and he is seemingly hitting every other ball for six, it would be best to sit back and enjoy the experience. In one great year, the Mumbai dasher has scored 1,286 runs in 20 ODIs at the stunning average of 75.64 so far. Maybe it is because he has done so in the shadow of the preeminent Virat Kohli that we have not see how much he has really dazzled. The figures show he was only 1.2 runs on an average behind his skipper. Again, let’s just say that it was good for Team India that it had two batsmen in great touch in 2017 and Rohit has one more innings to play.