How impatient Dhananjaya de Silva was for his hundred? 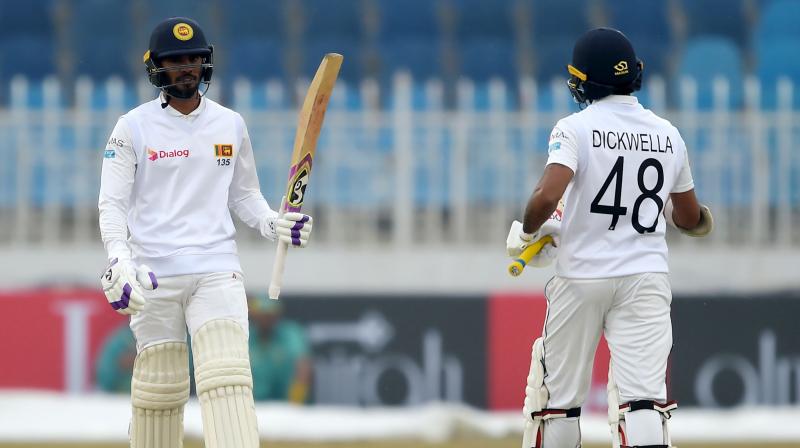 Before going out for the final day's play in the Rawalpindi Test, it was clearly in the mind of Sri Lanka captain Dimuth Karunratne to declare the innings immediately after Dhananjaya de Silva achieves his hundred in the rain affected match and he immediately did so at the completion of over. (Photo:AFP)

Dubai: Before going out for the final day's play in the Rawalpindi Test, it was clearly in the mind of Sri Lanka captain Dimuth Karunratne to declare the innings immediately after Dhananjaya de Silva achieves his hundred in the rain affected match and he immediately did so at the completion of over.

Dhananjaya de Silva was on 72 (28 runs short of his century) at the end of the game on second day, 13 short at the end of the match on third day, and the match was washed out on fourth day and, hence, he could only complete the century on the last day of this drawn Test.

How impatient he could have been all these hours?

We put this question before Australia's renowned psychologist Dr. Phil Jauncey, who has also worked recently with many current Sri Lankan players.

Here's what he observed:

"Dhananjaya’s batting and handling the rain day off, I have no idea what he did in that situation, but I can tell what I had been teaching them in the past. I tell players that it is important for them to understand the difference between goals and aims. A goal is something we can control, whereas an aim is something we cannot. Aims include winning, being selected or getting a hundred."

"A cricketer must set him/herself goals of what bowling or batting will help them achieve the aims of getting wickets or scoring runs. In cricket one can bowl or bat well and not get wickets or score many runs. Thus, if on the wash out day, Dhananjaya was thinking that he hopes to score a century, he would be thinking of things beyond his control. If on the other hand he was focused on how he must get himself in and then keep batting the way he scored his first 72 runs, he is in control."

April 1 was a rest day; and there was no play on April 2 (day-2 because of rain); so Richards had to wait for two days; and until after lunch on scheduled day-3 before getting those 3 runs to complete his hundred.