It was a magic moment for me: Abid Ali

Abid became the first batsman in history to score hundreds on both Test and ODI debuts. 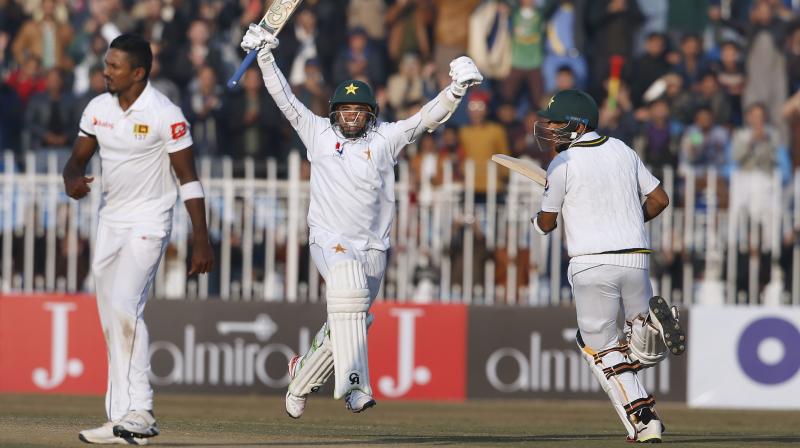 Pakistan's record breaking batsman Abid Ali on Sunday said that it was a magic moment for him to score a Test century on debut against Sri Lanka here in the country's first home match in the long form of the game in 10 years. (Photo:AP)

Rawalpindi: Pakistan's record breaking batsman Abid Ali on Sunday said that it was a magic moment for him to score a Test century on debut against Sri Lanka here in the country's first home match in the long form of the game in 10 years.

Abid became the first batsman in history to score hundreds on both Test and ODI debuts.

"What can I say? What more can one ask for. Getting a century in my debut Test and that too in the first Test in Pakistan in 10 years is a magic moment for me," Abid said after the rain-hit first Test ended in a draw at the Rawalpindi stadium.

"I want to dedicate this hundred to my darling daughter. I also thank my wife, my family, the media and the team management for supporting and encouraging me all the time. Playing in front of my home crowd which backed me from the first ball made the task easier for me," he said.

England women's team all-rounder Enid Bakewell was the first cricketer (male or female) to score centuries on both ODI and Test debuts.

The 32-year-old Abid, who has been a prolific scorer in domestic cricket since last year, got his first breakthrough when he was picked to play against Australia in the ODI series in the UAE early this year.

He got an ODI hundred on debut in Dubai in March this year against Australia but after that series suffered heartbreak when he was not picked for any of the Tests in South Africa and also did not get into the World Cup squad.

Abid, who also became the first Pakistani batsman to score a hundred after 19 years at the Pindi stadium, admitted he was feeling nervous and there was tension for him when he reached his nineties.

"But Babar (Azam) calmed me down and told me to focus as I should not get out after coming so close to my milestone. I learnt about the record of scoring hundreds on debut in Test and ODIs during the tea break and it made me nervous," he said.

Abid started the new domestic first class season in September with an unbeaten 249 for Sindh against Baluchistan at the UBL complex prompting his selection for the ODI series against Sri Lanka and then the tour to Australia.

Abid said he was not depressed or disappointed at not getting chances to play in South Africa or Australia as the team management supported him and he knew his time would come eventually.

"I am just happy that I was able to get my debut century in front of my own people who have been denied the chance to see Tests at home since 2009," he noted.

While Younis Khan was the last Pakistani batsman to get a Test hundred at the Pindi stadium in 2000 it was India's Rahul Dravid who scored the last hundred at this ground in 2004 with his epic 270 against Pakistan before Abid's feat on Sunday.