For the 50-year-old Lara, who scored nearly 12,000 runs in Test cricket, Kohli can fit into the best teams of any era. 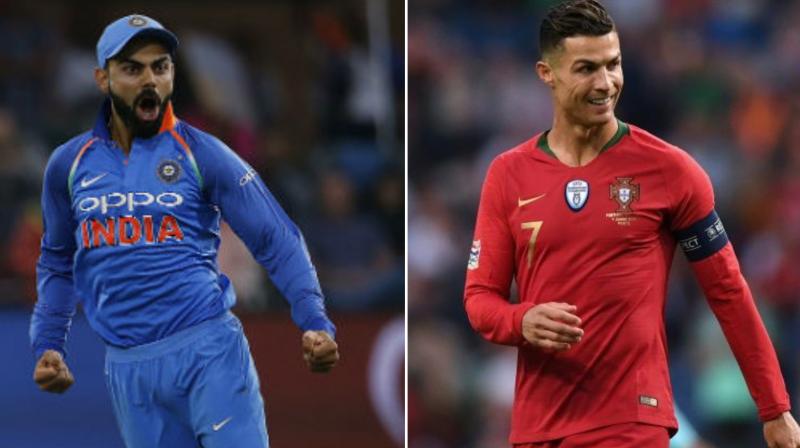 Visakhapatnam: Virat Kohli is the cricketing equivalent of soccer superstar Cristiano Ronaldo for his sheer commitment towards the game even though a K L Rahul can consider himself at par with the India captain in terms of talent, feels West Indies batting icon, Brian Lara.

One of the greatest batsmen to have played the game and for many, the best left-hander of all-time along with Sir Garfield Sobers, Lara says he is in awe of how Kohli has honed his skills to take batting to an "unbelievable level".

"I think it has got a lot to do with Virat's outstanding commitment besides his preparation. I don't think he is any more talented than a KL Rahul or a Rohit Sharma but his commitment to preparing himself properly stands out. He is, for me, the cricketing equivalent of Cristiano Ronaldo," Lara told PTI during an exclusive interaction.

"His fitness level and his mental strength are unbelievable."

"His batting skills are unbelievable. He is a guy you cannot leave out in any era. If a guy is averaging 50 plus in all versions of the game, then that is something which is unheard of," the legend said.

Another player Lara praised was English all-rounder Ben Stokes, who enjoyed a stellar run in the World Cup and the Ashes.

Lara himself has been a part of some of the most memorable fourth innings chases against Australia where he batted with the tailenders.

Therefore, it wasn't surprising to see Lara gush about Stokes' Ashes-saving 135 not out at the Headingley.

"It was an unbelievable innings that he played. You must give him the credit not only for that innings but also for his 84 not out in the ODI World Cup final. He came up through a very rough period couple of years back (Bristol pub brawl and subsequent suspension) and he has shown the mettle to put things aside and soldiered on as a cricketer."

Talk about West Indies cricket and how most of the talented players are being lured by private leagues, Lara refused to call them "mercenaries".

"Certainly not," said Lara, who didn't agree with the view, saying some of the illustrious predecessors in the late '70s had already set the precedent by joining Kerry Packer's World Series Cricket (WSC).

"Each cricketer has to make a choice. Back in the day in late '70s, there was Kerry Packer and there was an exodus of cricketers. I can't say that there's something that's new.

"Not everyone will be playing for the West Indies. So if you can make a living playing T20 leagues then why not? I don't see it as a mercenary act," Lara said.

However, he wants Cricket West Indies (CWI) to draw a plan that would keep youngsters interested in Test cricket keeping their below-par show in the longest version during the past few years.

"I am hoping that West Indies don't have to get involved in a lower Test level. Series like West Indies vs Australia (Worrell Trophy), West Indies vs England (Wisden Trophy) have always had a legacy created over the years," he said.

"West Indies have 5 to 6 million people, different islands, different politics. You have seen Usain Bolt run for Jamaica and not for the West Indies. Cricket is the only unifying force but still has its problems to keep it unified in terms of getting the infrastructure needed," Lara said.

The lure of private leagues will be there but then it's the custodians of the game in the Caribbean, who need to take the initiative and show the world that they care about their players, Lara said.

"...it's a situation where as a youngster, you have an opportunity to go out there and make a living for yourself. So hopefully, it doesn't do too much damage but it still belongs to West indies board, the power to ensure that it doesn't happen," he asserted.

"A youngster may want to do different things, (but) if you have a structure in place, I am sure you can have the effect of what the baggy greens have in Australia.

"Look at the current Indian cricket team. They have the most exciting T20 league (IPL) and yet they are excited about Test cricket as well as all the versions of the game," he said.

He is not averse to contributing actively to West Indies cricket but then he wants CWI to decide how badly they want his services.

"It depends on Cricket West Indies to decide on who all they want in their set-up. Over the years there has been a lot of involvement by former cricketers. As far as I am concerned, it might be in the horizon, you never know," he said.