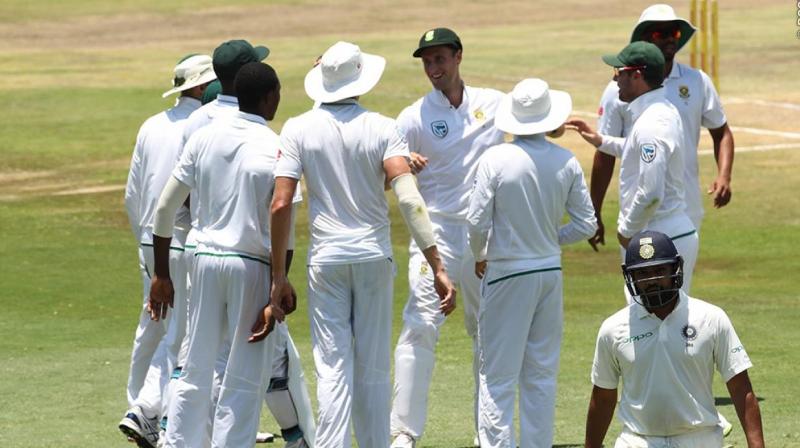 Cheteshwar Pujara was out run-out as South Africa strcuk early on Day 5 of the second Test. (Photo: BCCI)

Centurion: Leaving India reeling at 35-3 at the end of Day 4 of the 2nd Test, South Africa bundled out the visitors for 151 as early as the morning session on the final Day in Pretoria on Wednesday.

With that, Faf du Plessis men bagged the Freedom Test series with a 2-0 lead also putting an end to India’s record nine consecutive series win in a row.

India’s hopes of revival were dented on early after they lost Cheteshwar Pujara courtesy of a run-out, who was dismissed in the same fashion as the first innings. Wicket-keeper batsman Parthiv Patel soon followed his partner’s footsteps in the pavilion.

Lungi Ngidi got his first breakthrough of the day by getting rid of Hardik Pandya after the batsman over-improvised a cut shot over Quinton de Kock’s head, eventually handing him a catch.

Ravichandran’s Ashwin was unable to put up a gritty show once again after Ngidi dismissed him early on.

Virat Kohli and co were given hopes, as Rohit Sharma and Mohammed Shami went on to resurrect India’s innings with a promising partnership but that was brought to end by Kagiso Rabada, who baffled Rohit with a short ball.

Just a few overs to go for the lunch break, Ngidi wrapped up the innings with soft dismissals of Mohammed Shami and Jasprit Bumrah.

WICKET! Number four for Lungi Ngidi as Ashwin edges one to Quinton de Kock. This is fine bowling from a man on debut. India are in tatters. South Africa three wickets away from series win.

WICKET! Hardik Pandya gone! Lungi Ngidi has his 3rd. Poor shot selection from Hardik but what about that catch from Quinton de Kock! South African fielding has been top notch this morning.

WICKET! Stunner! Morne Morkel has caught a beauty of a catch in the deep. Kagiso Rabada banged one short and Parthiv has taken it in. It looked good for a four till the time Morne jumped to his right, rolled on the field to take that catch. India 6 down. South Africa have made early inroads.

WICKET! Oh Pujara, what have you done! Run-out! He was slow between the wickets and that has cost India a wicket. He is out run-out for the second time in this Test. Poor running between the sticks as Lungi Ngidi, AB de Villiers and Quinton de Kock's tag team work does him in.

South Africa pacers will hope to come out all guns blazing and claim the remaining seven Indian wickets and win the match and series on the final day of the second Test match at Centurion.

After being set a target of 287 runs to level the series, India got off to a worst possible start as Murali Vijay saw his leg stump disturbed by Kagiso Rabada. KL Rahul’s poor run with the bat continued as he was dismissed cheaply by debutant pacer Lungi Ngidi.

Cheteshwar Pujara and skipper Virat Kohli, who scored 153 runs in the first innings were expected to steady the innings, but South African debutant dealt a major blow to India’s winning chances by dismissing the Team India skipper with a confident LBW appeal.

Team India will now bank on Cheteshwar Pujara and wicketkeeper-batsman Parthiv Patel to stay at the crease for as long as they can.

The two have a huge task in hand as they look to pull off a miracle on the final day by saving the match for the team and keeping the series alive.

Big day for the batsmen coming up as we gear up for the final day at Centurion #TeamIndia #SAvIND pic.twitter.com/sno2diKSh7

What time does the match start?

The match is scheduled to start at 1.30 pm IST

Where can you watch the match?