Feel-good India should be wary of batting collapses

Interestingly, Afghanistan is the first Test country that didn’t belong to the Commonwealth. 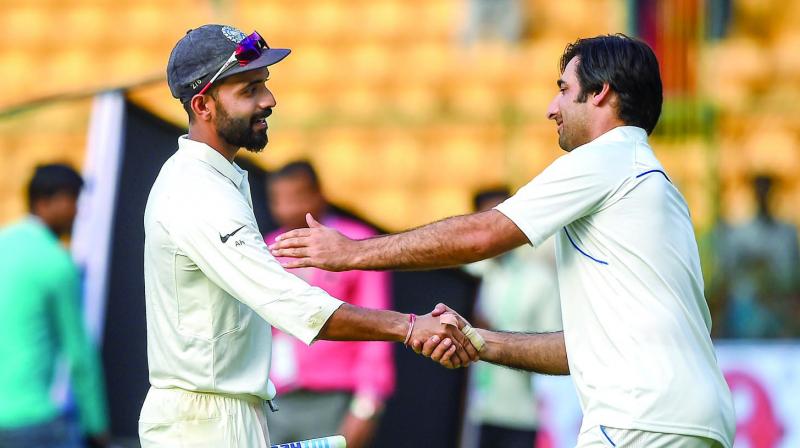 Rahane struggled for rhythm and runs, Pujara spent a fair amount of time before being dismissed for 35, while Karthik was run out in a misunderstanding with partner Pandya that would earn admonishment even in schools cricket.

The only magnanimous gesture made by the Indian team towards Test debutants Afghanistan came after the match when captain Ajinkya Rahane asked the visiting team to join his players in the celebratory group photograph.

For the two days that the Test lasted, India were relentless in pursuit of victory. It is easy to lapse into complacency against weak opponents, which can sometimes boomerang. Also, India’s next Test is against England, so winning momentum was important.

The bowling and fielding was top class, and if I am a trifle stilted in my praise for the batting, it is only because of the slump in the last session of the first day when five wickets fell. Frankly, this mini-collapse happened without good reason, raising some questions.

True, Afghanistan’s bowlers tightened up a fair bit in the last session of the first day after being terribly profligate in the first two, but the flurry of wickets was caused more by the batsmen themselves — and not because of extravagant or self-indulgent strokeplay.

Rahane struggled for rhythm and runs, Pujara spent a fair amount of time before being dismissed for 35, while Karthik was run out in a misunderstanding with partner Pandya that would earn admonishment even in schools cricket.

In the more daunting Test series against England, this kind of collapse — from 318/5, after being 280/1 — may not be easy to recover from. Indeed, but for Pandya’s superb 71 — the best innings after Dhawan — India may have struggled to cross 350.

From an individual perspective too, the onus was on middle order batsmen to establish their places. With Rahul doing well after a spectacular IPL, both Rahane and Pujara lost a splendid opportunity to make a big score and shift the debate elsewhere on Kohli’s return.

Essentially though, this match was about Afghanistan. The acute hardship under which the sport has taken root in the war-torn country, the extraordinary challenges faced by this bunch of players to reach this far makes for one of the greatest sagas in the history of sports.

Their struggles and triumphs have justifiably been romanticised and one can say that the Afghanistan team found a lot more support among cricket fans across the world when they took the field than underdogs usually enjoy.

Cricket history otherwise is unflattering to teams playing their first Test. Barring Australia, who won the first-ever such contest beating England in 1877, and Zimbabwe who drew against India in 1992, all debutants have lost.

Yet defeat in less than two days at Bengaluru will rankle Afghanistan. They were expected to perform much better.

The bowlers looked of good standard once they had overcome their nerves (though over-dependent on Rashid Khan), but fielding could improve and the batting is clearly undercooked.

That the two innings lasted a measly 66.3 overs throws up a massive shortcoming, even allowing for the fact that Afghanistan were playing away from home and against the world’s no.1 ranked team. There is a lot of work ahead for them.

The difference between red and white ball, Test and limited overs cricket can be massive, particularly for a team with limited exposure in the longer format. Not just talent and technique, but also temperament comes under harsh scrutiny.

These attributes only become better playing the long format consistently over a period of time, and as often as possible being exposed to superior teams. This is the challenge for Afghanistan cricket, and perhaps more for the sport’s minders.

Without any great legacy or infrastructure, Afghanistan are severely handicapped in raising a large enough pool of quality players. This is where the ICC and other cricket boards must offer opportunities to players of promise and make the interest in the sport grow in Afghanistan.

The sad fact is that cricket has remained exclusivist rather than inclusive. In its 140-plus year history, there are only 12 teams that play the longest format, and two of them — Ireland and Afghanistan — were admitted this year!

Interestingly, Afghanistan is the first Test country that didn’t belong to the Commonwealth.

This represents a giant step taken by the ICC, but must be matched by sustenance measures involving other Boards — like opportunities in first class cricket in their countries and Test matches regularly — if this has to have long-term relevance.