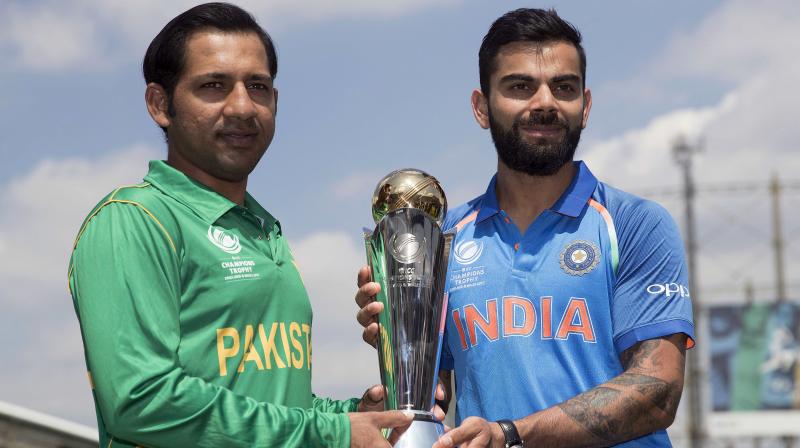 From 1978, when the two teams met for their first One Day International (ODI) at Quetta when India won by four runs, encounters between the two nations have always provided razor-edge excitement. (Photo: AP)

This piece is being penned a few hours before the fiercest rivalry in the world of cricket is about to start. India versus Pakistan is not just a cricket match played on the greens. The derby is much more than a game between 22 individuals donning their respective country’s colours. It’s more an emotional battle fought by crores of one time countrymen divided by the politics of religion.

It is obvious that there will be gamesmanship when such a key match is held, that too in the most coveted tournament in the world of cricket, the International Cricket Council World Cup 2019 (WC19). Unless the mischievous party pooper — read rain — decides to ruin things, as it has been doing in the tournament, you will have a big smile or a bad frown while reading this.

Having had the privilege of playing club and office cricket with many Indian internationals who have played against Pakistan, one can safely say that the pressure they had borne was purely a cricketing one. The emotional burden lies mostly with the fan who keeps the memories, happy or sad, within the recesses of his mind, till the next duel between the two sides.

From 1978, when the two teams met for their first One Day International (ODI) at Quetta when India won by four runs, encounters between the two nations have always provided razor-edge excitement. Initially, both teams were almost on par as far as wins and losses were concerned till Sharjah happened. The only cricket stadium (then) in the desert kingdom of the United Arab Emirates saw Pakistan take a huge lead of victories above their neighbours.

In 24 matches played at Sharjah, Pakistan beat India 18 times and Indian cricket fans would rejoice, much more than an encounter played elsewhere, each time their team had a successful foray amid the dunes. There are many memories of the ground, that Indian and Pakistani cricket fans will never forget.

The last ball six by Javed Miandad off Chetan Sharma (here we go again), is how the bowler will be remembered. His hat trick (the first by any bowler in a World Cup) match against New Zealand in 1987 will be an ‘also ran’; each time his name crops up. The collective Indian effort of dismissing Pakistan for 87 runs and winning by 38 runs in 1985 is also a distinctly happy recollection for Indian fans.

From 1984 when the first match was played in the Sharjah dust bowl, till 2000, green was the only colour that dominated. The Sharjah bogey kept growing in the minds of Indian fans with many myths about why their able team could not find gold consistently in the desert. Rumours of biased umpiring, partisan crowds and images of exiled Indian gangsters did not exactly give confidence to an Indian fan each time his team left for Sharjah.

In 1994, one spent an afternoon with Sachin Tendulkar for an interview conducted for a now defunct weekender. He was just 21-years old and had brought his first apartment, bang below the one he lived with his parents, in the sylvan Bandra area of Mumbai. The near empty flat only had two chairs opposite a big television set connected to a video recorder which was playing videos of Vivian Richards throughout the interaction. As his club team mate, one could ask him questions without a hitch, which the young superstar answered succinctly.

When it came to Pakistan (where he made his international debut) and India’s losses in Sharjah, Sachin was direct and to the point. “We must fight fire with fire”; were his first words on the topic.

“When you play against a team like Pakistan, the planning should be to take maximum advantage and milk the middle overs, not just concentrate of the first and the slog overs.”

Sachin’s entry into Indian cricket, soon followed by Saurav Ganguly, Rahul Dravid and Virendra Sehwag, turned the tables on India’s neighbours. This generation of cricketers started to beat Pakistan at their home turf and slowly but surely maintained the upper hand with many more victories, with a success rate of 75 per cent in ODIs since 2015. Irrespective of what has happened at Manchester in WC19, for a Pakistani fan, losing to India in all their World Cup encounters (six before this match) is akin to the Sharjah bogey that Indian fans carried for ages.

From the dusty environs of Quetta, to the cool air of Manchester, via the sun baked stadium in Sharjah, it has been a long journey for Indian and Pakistan cricketers. The players have taken the wins and losses in their stride and have moved on as friends. It is now up to the fans to follow the example of their heroes.