The 32-year-old added another feather to his cap by scoring over 50 runs in five consecutive ODIs for India. 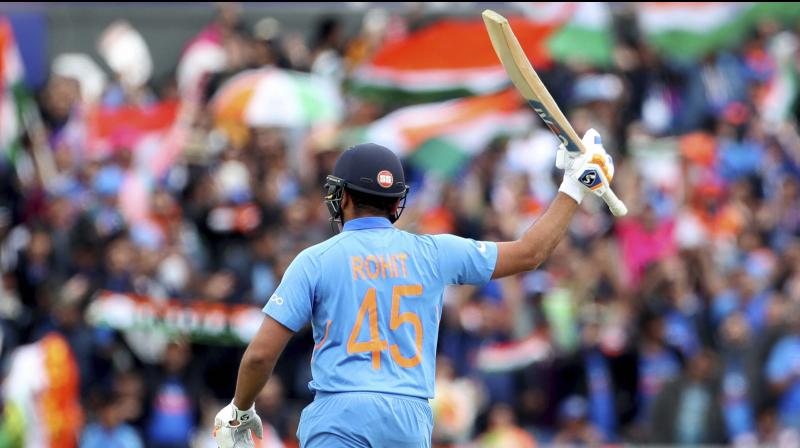 Sharma opened the batting with his new partner KL Rahul as Shikhar Dhawan was rested after sustaining an injury during India's match against Australia on June 9. (Photo:AP/PTI)

Manchester: Indian opener Rohit Sharma, whose scintillating ton guided India to an 89-run win over Pakistan on Sunday, said his focus is to start well and provide a platform from where the team can take over and score runs comfortably.

"We know how important it is to start well at a World Cup, so the focus was on that first of all. As a team, we're heading in the right direction. It's important to keep ticking all the boxes," Sharma, who scored 140 off 113 balls, said in the post-match press conference.

The 32-year-old added another feather to his cap by scoring over 50 runs in five consecutive ODIs for India. He joins the likes of Sachin Tendulkar, Ajinkya Rahane and Virat Kohli (twice).

Sharma opened the batting with his new partner KL Rahul as Shikhar Dhawan was rested after sustaining an injury during India's match against Australia on June 9.

"In conditions like that, it's more of a new ball game and the opposition can put pressure on you if they get going. We wanted to build a platform and tried to take the game forward.

It was KL's first game as the opener for India, so I wanted to make sure he was comfortable," Sharma said, adding, "There's a challenge you face in terms of understanding when he wants to run two when I want to take singles and things like that."

The duo appeared to click instantly, adding 136 runs together for the opening wicket, to register India's record-high opening partnership in the ICC Men's Cricket World Cup against Pakistan.

Sharma's knock set a platform for India to reach 336/5 and helped the team gain the upper hand in the match that eventually turned into an easy win for the Men in Blue.

"The crowd comes to matches for entertainment and we were really good as a team. We really wanted those two points following the washout last time and we wanted to display our skills because we've been in good form," Sharma opined.
India will next face Afghanistan at Southampton on June 22