KL Rahul had barely settled at number four when he found himself yoked to Rohit Sharma at the top of the batting order. 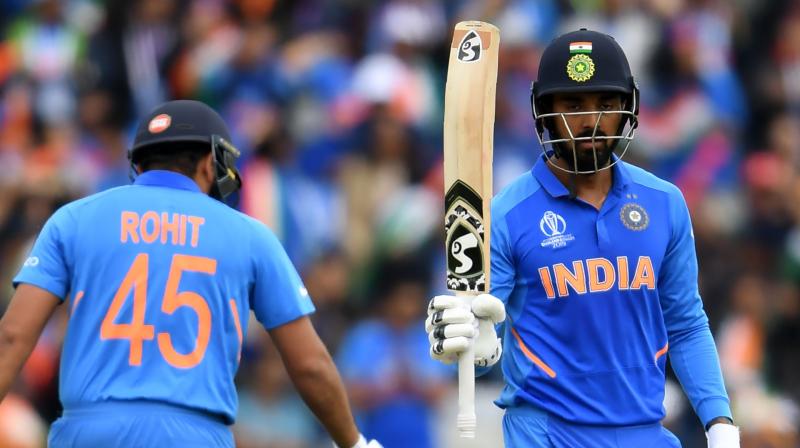 India expect Dhawan to be fit before the June 30 match against England but Rahul’s first fifty of the tournament suggests he can be a handy replacement. (Photo: AFP)

A clinical victory against the reigning champions tasted less sweet than usual because of the injury which forced India into a top order rejig early in their World Cup campaign.

KL Rahul had barely settled at number four when he found himself yoked to Rohit Sharma at the top of the batting order and his cultured 57 in Sunday’s blockbuster against Pakistan was a testament of his ability.

“Everyone knows how good a batsman Rohit Sharma is but for me, the more important innings against Pakistan was from KL Rahul,” former captain Krishnamachari Srikkanth wrote in a column for the International Cricket Council.

“Going into the game, the biggest question mark about this India team was how they would cope without Shikhar Dhawan.

“The fact the top three all got runs, that Sharma and Rahul put on more than a hundred for the first wicket and that Virat Kohli got more runs, is huge for India going forward in the tournament,” added Srikkanth, a former opener himself.

India expect Dhawan to be fit before the June 30 match against England but Rahul’s first fifty of the tournament suggests he can be a handy replacement.

The first six balls of the Indian innings pretty much summed up the approach of the 27-year-old Karnataka batsman who was determined to impress.

If requesting senior partner Rohit to let him face the first ball was bold, allowing Mohammad Amir - the tournament’s joint leading wicket-taker currently - a maiden first over was a statement of his maturity.

“Look, we did not know what to expect from the wicket, which was under the covers for the last two days. It was important we saw off the first spell,” Rahul explained afterwards.

“Amir is a quality bowler. We knew we had to focus from ball one because he has done damage in the first over previously.

“We did not take too many chances in the first few overs. We just got used to the wicket, gave the bowler and the balls the respect they demanded and then carried on from there.”

Put into bat under an overcast sky, a 136-run stand between Rahul and Rohit laid the foundation for India’s imposing total of 336-5.

Rahul played the second fiddle in a partnership which looked makeshift only during a couple of mix-ups with running between the wickets.

His senior teammate Rohit saw nothing unusual in it.

“These are the sort of challenges you face - the understanding of when he wants to run that two when I want to take that single, and things like that,” said the India vice-captain, who smashed a match-defining 140.

“We had a lot of communication today while we were batting, slowly we will build on it, now that I know he’s going to open for the next few games as well.

“Openers starting well is very, very important. We know that. So that will play a big part in coming games.”