Kuldeep has been steady in this World Cup with three wickets from as many games. 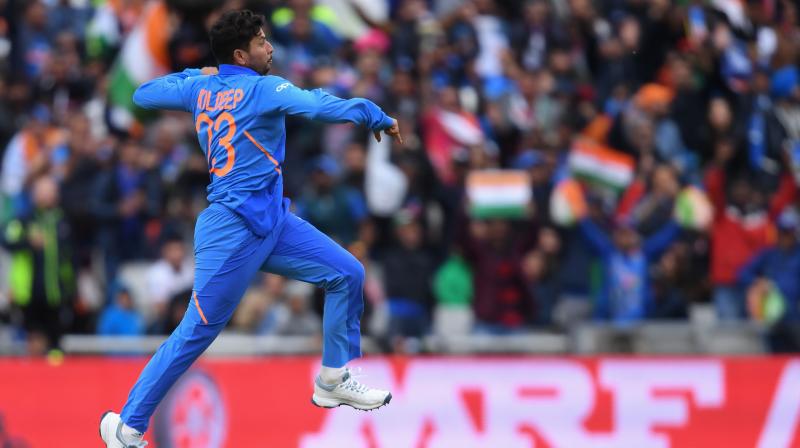 The spinner however was confident that Old Trafford wicket will provide assistance as he had earlier got a five-for in a T20 on this very ground against England (Photo: AFP)

Manchester: Kuldeep Yadav finds it extremely frustrating that he is being lauded for getting his rhythm back, something the India spinner feels he never lost in the first place.

Kuldeep's contribution in India's big win over Pakistan on Sunday was massive as he dismissed two set batsmen in Babar Azam and Fakhar Zaman.

"Everyone is talking about my rhythm but I never thought that I lost it," the irritation was palpable in Kuldeep's voice as he spoke to the media in the mixed zone.

Asked about Babar's dismissal, the young left-arm wrist spinner said it as "one of his best deliveries".

"I think (this is) one of the best deliveries in this tournament for me. I had earlier dismissed Babar Azam when we played the Asia Cup last year. He is a good player of spin.

"From a team's point of view, they (Babar and Zaman) were going very well. They were striking it well and also rotating the strike. We all know a wicket was crucial. It put them under pressure and after that Fakhar also got out," there was a sense of satisfaction in Kuldeep's voice.

The ball was an off-break for right-hander Azam but a conventional leg-break for the left-arm wrist spinner.

"I watched it when we came back for the break. The delivery had drift and turn and any spinner would have loved to bowl that delivery. It was a dream delivery. You can call it a proper Test match delivery. Deceiving the batsman in the air and forcing him to make mistake," he said.

Kuldeep, whose economy rate has been less than five per over, is happy with the way he has bowled till now.

Kuldeep has been steady in this World Cup with three wickets from as many games. Against Australia, he went wicketless but was able to keep things tight on a good batting track.

"From last three games, I have been bowling really well. In the last game against Australia, they were struggling to hit me and that is more important for any spinner. When they are struggling, you are getting the rhythm.

"Rotation of the ball and deceiving the batsmen in the air are the two most important things for any spinner. That's my strength and I really loved it," he said.

His vice-captain Rohit Sharma said that Kuldeep is a "confidence bowler" who needs to be goaded time and again to get the best out of him.

"Kuldeep is someone who needs a lot of confidence before going into his spell. So all -- as a team, we've been talking about him, how big a match winner he's been for us in the last year or so.

"He's probably, what, 48 games and almost 90 wickets. That is almost two wickets per game. That's a hell of a record for a spinner and most wickets have come outside the sub-continent," said Rohit.

The spinner however was confident that Old Trafford wicket will provide assistance as he had earlier got a five-for in a T20 on this very ground against England during the bilateral series last year.

"When I last played here in a T20, I got a five-for. I know the conditions here favour spinners. I was getting a little bit of turn from the first over itself. My strength is to turn the ball and whenever I get a pitch like this, I try and turn the ball."