ICC CWC'19: Vijay Shankar reacts on his performance against Pakistan

Fast bowler Bhuvneshwar Kumar pulled his hamstring in the fifth over of Pakistan's inning, after which skipper Kohli turned to Shankar. 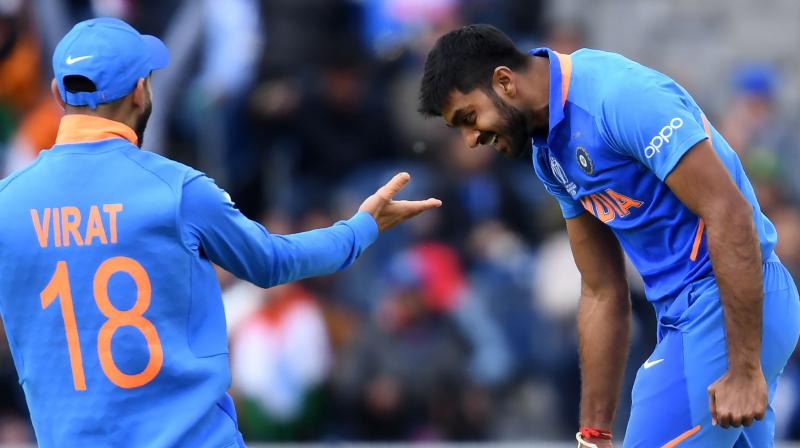 In the match against Pakistan, Shankar added 15 runs while in bowling he finished with a spell of 2-22. (Photo: AFP)

Dubai: Indian all-rounder Vijay Shankar, who took a wicket on his first ball in the ICC Men's Cricket World Cup match against Pakistan on Sunday, opined that all-round performance is very important for him.

"I have to be flexible in my role, batting, and bowling. I am someone as a cricketer who feels it is very important to be able to adapt quickly to the situation," International Cricket Council quoted Shankar, as saying.

Shankar was included in the playing XI in the match against Pakistan as opener Shikhar Dhawan got injured and was ruled out for a week. Dhawan was struck on his finger during the match against Australia on June 9.

Fast bowler Bhuvneshwar Kumar pulled his hamstring in the fifth over of Pakistan's inning, after which skipper Virat Kohli turned to Shankar. The latter successfully provided the first breakthrough to the team on his first delivery of the match.

"Coming on to bowl so early was a surprise for me," Shankar reflected, adding, "Every bowler would love to get wickets in the World Cup and first of all we need big wickets as a team."

Shankar was picked over Ambati Raydu in Indian World Cup squad as he possesses three-dimensional (3D) abilities- batting, bowling, and fielding. In the match against Pakistan, Shankar added 15 runs while in bowling he finished with a spell of 2-22.

"I have been batting well, and bowling is something which I know will be very handy for me. It is important to improve all aspects of my game so when the situation comes along, I will be ready for all situations," Shankar said.

"I just think it was a great opportunity to make my World Cup debut against Pakistan when there would be so many people watching the game. I try to enjoy each and every moment," he added.