Kohli made a half century and consistently rose to go to 77 from 65 balls, breaking a record for the fastest 11,000 runs along the way. 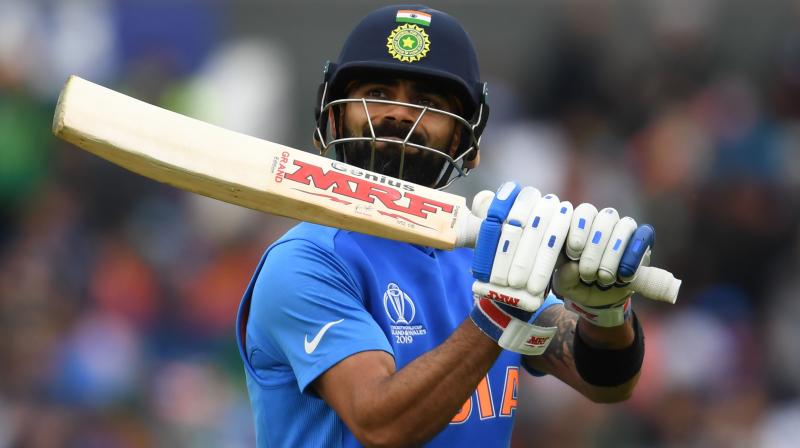 Kohli started walking towards the pavilion himself (Photo: AFP)

Mumbai: Indian skipper Virat Kohli was a major factor in India’s triumph over neighbour-rivals Pakistan. Amidst ongoing political tensions between the countries, controversial advertisements and the determination to reach the top of the table, the boys in blue also had to face the pressure of maintaining a 6-0, unbeaten record in world cup games against Pakistan.

While Rohit Sharma stood out, owning 140 runs, a large chunk of the huge 337 target, It was Kohli who lasted on the pitch during the crucial mid-innings period. He made a half century and consistently rose to go to 77 from 65 balls, breaking a record for the fastest 11,000 runs along the way, when something shocking happened.

Less than two overs away from the end of the innings, Kohli tried to play a short ball by Mohammad Amir, Pakistan’s most feared bowler. Kohli swung his bat very close to the ball, which ended up in Pakistan captain and wicket-keeper Sarfaraz’s gloves.

In between Pakistani players unkeen on an appeal and the Umpire still making up his mind, the Indian skipper, sure he heard a sound, started walking towards the pavilion himself, prompting the final decision to be an ‘OUT’.

As Vijay Shankar made it to the pitch, TV replays showed no contact between the bat and the ball.

A frustrated Kohli, along with former captain MS Dhoni were seen vigorously shaking the bat, checking for creaking sounds due to the handle being loose, implying that Virat’s decision to leave the pitch ahead of the Umpire’s call was likely due to him hearing a faulty bat sound that he mistook for a nick.

"Will use the same bat"

While speaking to Ian Ward of Sky Sports, Kohli confirmed this, but said he’d continue to use the same bat after reinforcing it some tape.

Fans lost their minds and wondered at why the Indian skipper gave up on his wicket so easily, especially in a game of one of cricket’s biggest rivalries. Moments ago, commentators declared Kohli the difference between a 330 and a 350 target, and now the skipper was gone.

Expert Harsha Bhogle was shocked to see the incident-

Wow, nothing on snicko for the Virat dismissal......And he walked!

Not a problem for team India

Whether Kohli’s walk off was an act of sportsmanship or stupidity will be debated over for ages. However, thanks to the supreme bowling and fielding from an Indian team that had already set a target of 337, Kohli’s false dismissal wasn’t a very big step backward for the team, and India went on to win the match.