ICC CWC'19: WI vs BAN; Key players to watch out for

On the other hand, Bangladesh started well in the World Cup as they defeated higher rank South Africa in their first match. 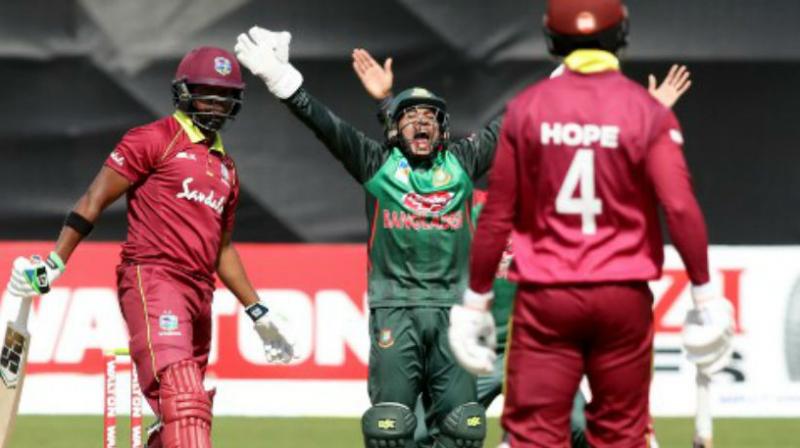 Windies have played four matches so far and were only able to win one match, against Pakistan. (Photo: AP)

New Delhi: Both West Indies and Bangladesh will search for their second win as they lock horns on Monday in the ongoing ICC Men's Cricket World Cup at Taunton.

Windies have played four matches so far and were only able to win one match, against Pakistan. The team holds the sixth position in tournament's standing with three-points as one of their matches was called off due to rain.

The team have the ability to disappoint any opponent on their day. Men in Maroon scored the mammoth total of 421 against New Zealand in their warm-up game and defeated them by 91 runs.

On the other hand, Bangladesh started well in the World Cup as they defeated higher rank South Africa in their first match. After that, the team lost two consecutive games and their last game was abandoned due to rain. Bangla Tigers have an experienced side with a couple of match-winning players.

Key players to watch out for in the West Indies-Bangladesh clash:

The 39-year-old big hitter is playing his last World Cup. Gayle is a promising in-form batsman to give a brilliant start to his team in the top-order. The left-hander has featured in 293 ODIs and has 10,000 plus runs under his belt. Gayle scored 135, 50, 162, 77 against England in the five-match ODI series, excluding the third match, which was abandoned, earlier this year. He scored a fifty off just 34 balls against Pakistan in their World Cup opener and has scored a quickfire knock of 21 runs against Australia.

Shakib is at the top in the ICC ODI rankings for all-rounders. The 32-year-old performed well during the tri-nation series against Ireland and West Indies. Shakib amassed 140 runs, including two unbeaten fifties. The left-arm bowler picked two wickets in a World Cup warm-up match against India. He scored 75 runs off 84 balls to allow Bangladesh to post their highest ever ODI total of 330 runs against South Africa. In the next match, he scored 64 runs against the Kiwis and scalped two wickets which gave Bangladesh a fighting chance in the match.

Like Gayle, this Jamaican destructive batsman has the potential to pick from wherever and drag West Indies to post a challenging target single-handedly. Although Russell has not played a single ODI since last year, he displayed his steady form in the recent Indian Premier League (IPL). In the World Cup warm-up fixture against New Zealand, Russell smashed a 25-ball 54 in the lower middle-order to take West Indies to 421. In the first World Cup match, Russell returned with figures of 2-4 against Pakistan.

The left-handed batsman has been in an exceptional form for Bangladesh. The player provided quickfire start to the team, giving the much-needed impetus to Bangladesh at the start. He along with Tamim Iqbal provides the team with a solid foundation. Sarkar scored 42 runs off just 30 balls in Bangladesh's first match in the World Cup against South Africa. The 26-year-old has become a linchpin of the Bangladesh team and the side's hopes will rely on him in the match against the Windies too.

Cottrell is known for his signature style of marching and giving a salute. In the recent five-match ODI series against England, the fast bowler bagged seven wickets, including a five-wicket in the second match. He can be an X-factor for the Caribbean side. Cottrell got an early breakthrough by dismissing New Zealand's Martin Guptill in a World Cup warm-up match. Against Pakistan in the first match, Cottrell picked the crucial wicket of Imam-ul-Haq on just 160 runs. Cottrell currently has five wickets under his name in the World Cup.