There have been suggestions that the pink ball does not swing as much or for as long as the traditional red cricket ball. 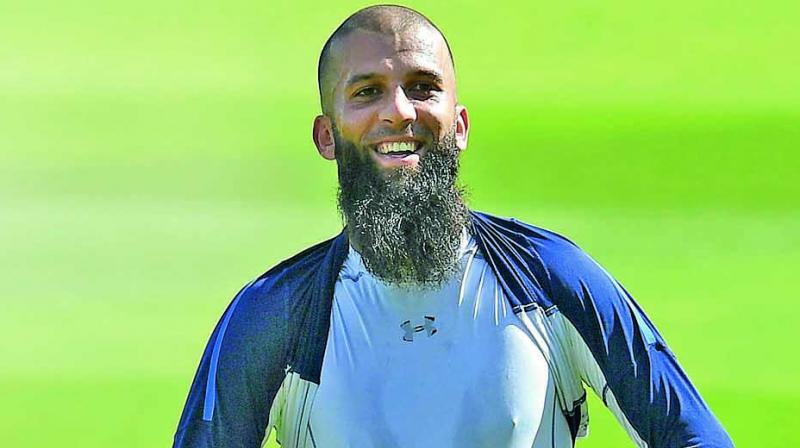 Birmingham: Moeen Ali is confident it will take more than a pink ball to put him off his stride during England’s inaugural day/night Test. The off-spinning all-rounder was England’s man-of-the-series after starring with both bat and ball during the recent 3-1 Test triumph at home to South Africa.

Now Birmingham-born Ali returns to the city’s Edgbaston ground, where he came through the youth ranks with Warwickshire before joining Midlands rivals Worcestershire, for what will also be the England team’s first taste of floodlit Test cricket in a series opener against the West Indies starting on Thursday.

There has been much talk about how the pink ball — required for floodlit Tests as the players’ traditional clothing makes the white ball familiar from one-day internationals as unusable as the standard red — will affect bowlers.

But Ali, who hit a fifty but bowled just three overs during the day-night round of County Championship fixtures scheduled as preparation for this Test, said: "It's different... it feels lighter off the bat. “Sometimes you don’t feel like you’ve hit it, and it goes; other times you’ve nailed it, and it doesn’t,” he added. “But you get used to it ... I did by the end of the (net) session.”

As for bowling with a pink ball, the 30-year-old Ali, who against South Africa became the first man to take 25 wickets in a four-Test series, said: “The seam is good — it’s not quite as slippery. It spun, maybe because the seam is hard. “Seeing it is fine. It will be interesting at twilight, but I will try not to think about it.”

There have been suggestions that the pink ball does not swing as much or for as long as the traditional red cricket ball. Meanwhile Dukes, the British-based manufacturer of the pink ball in use for this week’s day/night Test have also had to endure a ‘knocking campaign’ from Australian rivals Kookaburra.

But Dukes managing director Dilip Jadojia said much of the debate was “ill-informed”. “One has to take many of these comments with a pinch of salt,” Jadojia. “I ask for real evidence and at this moment there is no issue with the ball,” added the India-born businessman, who bought Dukes in 1987.

“Cricketers are nutters, and I know because I am one, but I’ve also been involved in making cricket balls for 45 years. The pink ball is not an alien thing. It’s just perception, opinion and psychology,” he insisted.

But while some are debating the validity of pink balls, others are questioning the wisdom of playing day/night Tests in England, given how much longer it takes to go dark in an English season compared to an Australian one.