Indian skipper Kohli had also backed Shastri's re-appointment as the head coach saying that he shares a great camaraderie with Shastri. 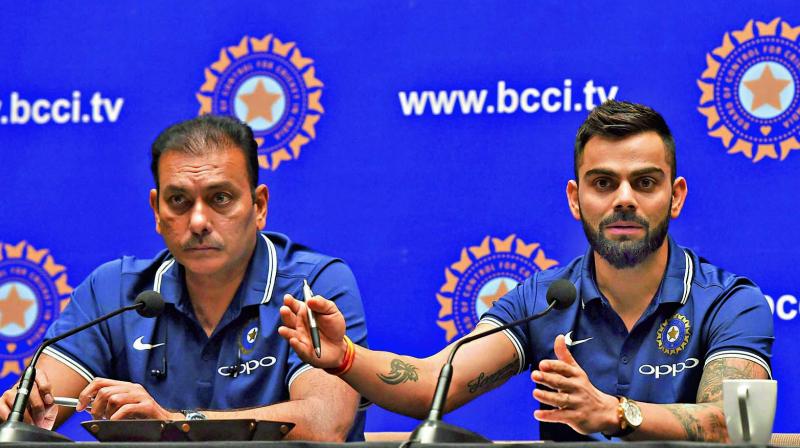 Mumbai: Former India cricketer Ravi Shastri has been appointed as the coach of the Indian cricket team for a second successive term. Three-member Cricket Advisory Committee- Kapil Dev, Anshuman Gaekwad and Shantha Rangaswamy- made the announcement on Friday.

Shastri was the team director of the Indian cricket squad from 2014 to 2016. He had lost to Anil Kumble in 2016 before successfully replacing him in July 2017 following the infamous Kumble-Kohli fallout.

Since Shastri's appointment as the head coach, India played 21 Tests (home and away) and were triumphant in only 11 matches with a win percentage of 52.38. India were undefeated at home, winning four out of the six matches with the remaining two ending in a draw. However, on overseas soil, India won seven Tests out of the 15 they played, losing on seven occasions.

Despite losing seven Tests on foreign soil, India were the best overseas team under Shastri's appointment in July 2017, as no other team managed to register five Test victories away from home in the span of two years.

India clinched the number one position in Test cricket in 2018 and in 2019, they still remain to maintain their spot.

Under Shastri's tenure, India won 44 ODI matches out of the 61 played, which include their invincible run to title victory in Asia Cup 2018 and reaching the semifinal of ICC World Cup 2019.

With 44 wins since Shastri's first appointment, India were the best-placed side in ODIs in the time period. England were second in the list with 35 wins in 51 games. Virat Kohli and Co also proved their mettle on foreign soil by registering 19 wins in 26 matches, recording an astounding win percentage of 73.07.

However, on home soil, India managed only 13 wins out of 21 matches, making them the fourth-placed side in the time period. England dominated the most on home soil by registering 22 triumphs in their 29 games.

Overall, India managed to win 80 games across all formats in 118 games under Shastri with a win-loss ratio of 2.6.