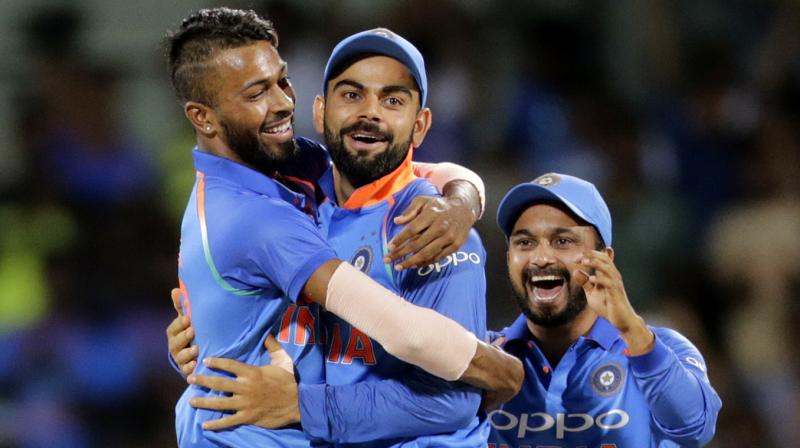 Hardik Pandya inspired India with both bat and ball, striking a blazing 83 while scalping 2 wickets for 28 runs. (Photo: PTI)

Chennai: Virat Kohli's Team India took a 1-0 lead in the 5-match ODI series against Australia on Sunday, after a fine all-round performance. Electing to bat first, the hosts set 281-7 on board after a dreary start. However, in reply the Australian's failed to chase a restricted target of 164 in 21 overs after rains halted play. Pandya inspired India with both bat and ball, striking a blazing 83 while scalping 2 wickets for 28 runs.

WICKET! Coulter-Nile can't help much with the bat as he smacks a slower one off Bhuvneshwar straight to Jadhav at deep mid-wicket.

WICKET! Another one for Chahal. The leg spinner spins the ball away from Cummins who looks to go big over mid-wicket. Gets the top edge and in the hands of Bumrah.

WICKET! There's no stopping India. Wade charges down the track and Chahal responds by bowling a wide googly outside off. Dhoni takes the bails off in a flash.

WICKET! Maxwell's sizzling cameo comes to an end after he fails to pick one from Chahal. The leg spinner tosses it up and gives a bit of flight. Maxwell gives an easy catch to Pandey at long on.

WICKET! Tossed up from Yadav, Stoinis goes low for a slog sweep, but doesn't quite connect well. Ball goes high up and straight to Jadeja at deep mid-wicket.

WICKET! Up goes the finger. Warner nicks one straight to Dhoni trying to play a cut off a googly from Kuldeep. India doing wonders.

WICKET! Pandya is working his magic with the ball now. Knuckle ball with a little with, forces Head to go for it. The southpaw miscues his shot and gives an easy one to Dhoni behind.

WICKET! Not much of an effort there for India. After surviving an LBW scare on the previous ball, Smith is bamboozled by Pandya's change of pace. The Aussie skipper goes for it too early, gets the top edge and finds Bumrah at short fine leg.

WICKET! Cartwright has no answer to that. Back of the length delivery and the youngster displays his poor shot selection by going for a pull. Cartwright misses and Bumrah hits. Out for nought.

Decent first overs from Burmah and Bhuvneshwar, with the ball doing it's bit. India, however, need wickets soon if they are to make things difficult for the visitors.

GOOD NEWS! The covers are being called off and Australia will have to chase a target of 164 in 21 overs. A maximum of 5 overs can be allotted to only one bowler while the others can bowl a maximum of 4 overs. Now that the total has been reduced for the Australians, the outfield might also be slippery and much quicker due to the recent rains. Big task ahead for India if they have to pull this off.

The rain Gods are being mean today, as the covers are being called for again. Overs will be shortened if it continues to rain like this.

Game will be resumed at 19:00 IST and 7 overs reduced from the Australian innings. There's no information yet on the target the Australians have to chase in application of the D/L method.

The 2nd innings has been halted due to a slight drizzle at the venue. The covers have been put on and game should be resumed in a while.

WICKET! After two boundaries in the over, Dhoni makes his way back to the pavillion. Dhoni charges down the track but gets a top edge that lands straight to Warner at long off. India finish at 281-7!

Vintage MS Dhoni as the former India skipper batters Faulkner for 16 runs in the over. Brings up the 50-run partnership with Bhuvneshwar. India in cruise control.

India have eased-off after Pandya's departure, saving wickets for the final overs. Bhuvneshwar Kumar and Dhoni have kept the scoreboard ticking with ones and twos, but they need to go big in the last few overs to achieve a respectable total. Stoinis wraps up his quota with figures of 54-2.

Hardik Pandya's majestic knock comes to an end after he miscues his slog. Zampa has the last laugh as his ball turns away, gets the top edge of Pandya and lands to Faulkner at short third man.

Courtesy of some hard-hitting from Hardik Pandya, India get to the 200 run mark. Pandya attains his highest ODI score and also brings up a century partnership with Dhoni. What has been the hallmark of his highlights despite the smoky blows, is the discipline he's shown to rotate the strike with MS Dhoni.

There's no stopping Hardik Pandya as he gets to a quick-fire 50. He smokes Adam Zampa for three biggies, and it's a huge over for India, bringing 23 runs. Big match player.

India have kept the scoreboard ticking at a healthy rate, with MS Dhoni playing a supportive role to Pandya. The Men in Blue need to avoid any risks at this moment.

WICKET! Nothing is going India's way. After a mix-up with Dhoni on the previous ball, Jadhav pulls one straight to cartwright at mid-wicket. Change of pace does the trick for Stoinis as Jadhav fails to read his short ball. India are crumbling like nine-pins as Hardik Pandya makes his way to the crease.

WICKET! Just a ball after the 50 bringing up the 50-run partnership, Rohit Sharma departs. The opener once again falls prey to a short ball and Coulter-Nile at deep square leg takes an easy catch. MS Dhoni, in at no.6 is welcomed in style.

Australia continue to put the pressure on the hosts. Jadhav and Rohit are finding their feet slowly, but the pitch seems to be assisting the Australian pacers.

WICKET! Is this for real? Manish Pandey has to make his way back to the pavillion and it's another duck for the Men in Blue. Dream spell by Coulter-Nile this.

WICKET! Australia get the big fish, thanks to a stunner from Glen Maxwell. Full and wide outside off, Kohli forces for the drive and directs it straight to Maxwell at backward point. The India skipper is out for nought and the crowd is in absolute silence. India in deep trouble.

WICKET! Never looked convincing, did he? After miscuing his pull, Ajinkya Rahane departs the next ball. Coulter-Nile bowls it wide outside off, Rahane makes room and nicks the ball straight to Wade.

A decent first-up from Pat Cummins. Both of India's openers, Ajinkya Rahane and Rohit Sharma have opened their account, but the new ball is shaping very well, something that will benefit the Australians. Nathan Coulter-Nile up for the next over.

Virat Kohli has won the toss as India elected to bat in the first ODI against Steve Smith-led Australia here on Sunday.

Warm-up game, done. Pre-match media interactions, done. The real drama and action are now set to get underway as Virat Kohli-led India take on Steve Smith’s Australia in the series opening first ODI at the Chepauk in Chennai on Sunday.

India, who are enjoying a fine run of form, winning Tests, ODIs and a solitary T20 in Sri Lanka on their way to 9-0 scoreline, start as favourites.

While they will feel the absence of Shikhar Dhawan, who is released from the squad for the first three ODIs to be with his wife, the form of Rohit Sharma, Virat Kohli, Manish Pandey and MS Dhoni provide the home team with solid batting power.

With the likes of Hardik Pandya, Kedar Jadhav and KL Rahul still in the squad, Kohli has options at his disposal to pick and choose the power hitters.

India’s bowling too looks in good shape with the comeback of Umesh Yadav and Mohammed Shami. However, the two won’t get a direct entry in the playing XI as Bhuvneshwar Kumar and Jasprit Bumrah had hardly put a foot wrong in the limited-overs leg in Sri Lanka.

India’s spin-bowling department too presents Kohli with a variety with Kuldeep Yadav, Yuzvendra Chahala and Ravindra Jadeja to choose from.

Australia, meanwhile, will be sweating over the fitness of their opener Aaron Finch. While the visitors have called in Peter Handscomb as Finch’s backup and has Travis Head in their ranks, Smith and co will like to have Finch to partner David Warner at the top.

Australia’s middle-order will depend a lot on Smith, India’s nemesis for a long time as Glenn Maxwell, Matthew Wade and James Faulkner will have to guide an inexperienced Australian batting line-up.

While Australia will surely miss the likes of Mitchell Starc and Josh Hazlewood, Pat Cummins’ presence gives Australia some much-needed pace at the top. Adam Zampa and Ashton Agar will take care of the spin-bowling department with Maxwell chipping in with a few overs.