Leach who has become a household name through his antics with spectacles posed with Smith who was also seen wearing glasses. 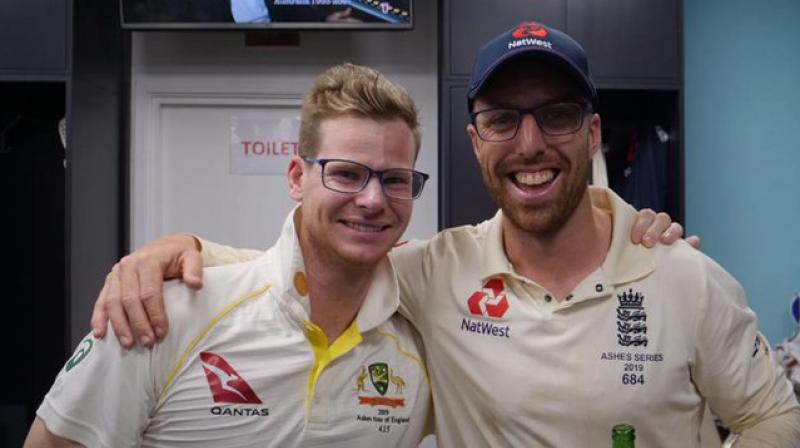 As the Ashes came to an end, Australia's batsman Steve Smith and England's spinner Jack Leach posed for a picture inside the dressing room. (Photo: ECB/Twitter)

New Delhi: As the Ashes came to an end, Australia's batsman Steve Smith and England's spinner Jack Leach posed for a picture inside the dressing room.

Leach who has become a household name through his antics with spectacles posed with Smith who was also seen wearing glasses.

England Cricket's official Twitter handle shared the picture and captioned the post as "An all-time great - and Steve Smith. Congratulations on an incredible #Ashes series @stevesmith49. Leachy loves the glasses".

An all-time great - and Steve Smith 😉

England defeated Australia in the fifth match by 135 runs on Sunday, but despite the win, the Three Lions lost the urn to Australia. The series ended as a 2-2 draw, and as Australia had defeated England in the 2017/18 series, the team from Down Under retained the urn.

Smith had an exceptional series with the bat as he scored 774 runs, scoring the most number of runs in a series this century whereas Leach managed to scalp nine wickets in the entire series.

Leach was also involved in the match-winning partnership with Ben Stokes in the third Test match at Headingley.

Ever since the start of this century, both England and Australia have managed to win the urn five times each.

After being set a target of 399, Australia was bundled out for 263 runs in the final innings. Matthew Wade was the top-scorer for Aussies as he played a knock of 117 runs whereas Stuart Broad scalped four wickets for England.

Despite losing the Test, Australia managed to retain the Ashes">Ashes as they had won the last series Down Under in the 2017/18 season.

Archer was given the Man of the Match award for scalping six wickets in the first innings of the match.

Stokes displayed an all-round performance, scoring 440 runs with the bat and taking eight wickets with the ball.

The first Test of the series was won by Australia by 251 runs at Birmingham.

The second match at Lord's finished as a draw and Stokes's heroics in the third Test at Headingley helped England level the series at 1-1.

However, Australia came back strongly in the fourth Test as they won the match by 185 runs to retain the Ashes.