India have now won all six tests since the World Test Championship kicked in. 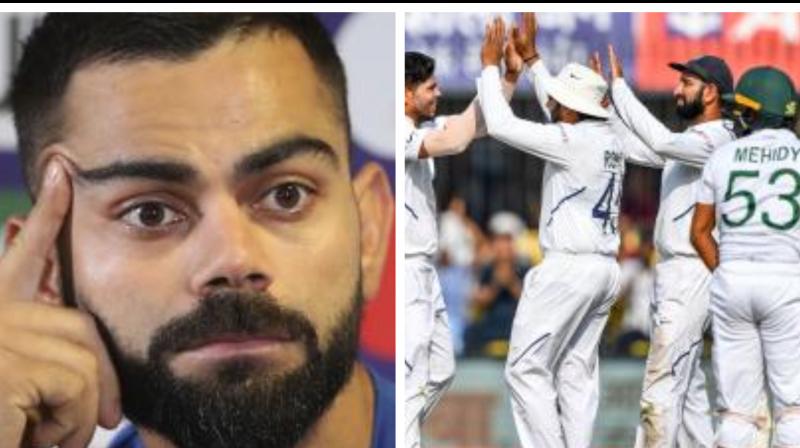 India thrashed Bangladesh inside three days in the opening test to inch closer to their 12th successive home series victory but skipper Virat Kohli is only interested in maintaining high standards and not in flattering numbers. (Photo: AFP/AP/PTI)

New Delhi: India thrashed Bangladesh inside three days in the opening test to inch closer to their 12th successive home series victory but skipper Virat Kohli is only interested in maintaining high standards and not in flattering numbers.

Table-topping India have now won all six tests since the World Test Championship kicked in, including a 3-0 whitewash against South Africa last month to record their 11th consecutive test series victory at home.

India hardly broke a sweat as they triumphed by an innings and 130 runs to go 1-0 up in the two-test series which culminated with a day-night test in Kolkata from Nov. 22.

Saturday’s win was also the 10th innings victory under Kohli, the most by any Indian captain.

Asked if his team could dominate the game like Australia did in recent past, Kohli said: “The numbers and the records are there for everyone to see, that remains in the books. We haven’t really focused on it.

“Our focus has been on taking Indian cricket higher and higher, to keep the standards up and motivate the next lot of players to come and do the same.

Kohli was visibly encouraging his team mates on Friday.

Dismissed for a second ball duck, the home captain was seen gesturing from the dressing room to opener Mayank Agarwal to first push for a double century and then a triple hundred.

“I know how much time it took me to get those big hundreds. I know the importance of getting big runs,” said the batting stalwart.

“It’s important as a senior batter to let them know that ‘you need to focus, they need to keep going’.

“I want the guys to not make the mistakes that I made as a youngster, and learn quickly so they can be a world class player very soon.”

Mominul Haque began his tenure as Bangladesh test captain with a resounding defeat and the task would only get tougher in the pink-ball test in Kolkata.

Apart from winning the toss, hardly anything went right for Bangladesh, who could not bowl out India in their only innings and managed totals of 150 and 213 at the Holkar Cricket Stadium.

“We take quite a few positives, especially the bowling of Abu Jayed who picked four wickets. In batting, Mushfiqur was superb with the bat in both innings. Liton Das did well too,” he said.

“The top order batsmen faced a challenge a very good bowling unit. We just have to handle the first 15-20 overs.”